A bright idea: plants made to serve as lamps at night 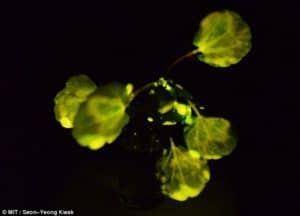 Researchers have done just that: create plants that can act as lamps at night.

A team of engineers at the Massachusetts Institute of Technology made a watercress that glows in the dark. Writing in a journal article they explain that by help of nanotechnology living plants can be engineered to emit visible light for longer periods because they possess the capacity for independent energy generation and storage mechanisms.

By infusing a plant’s cells with specific nanoparticles, the plant can be made to perform a particular task. In this case that task is to produce light in the dark.

To achieve that, the scientists saturated a liquid solution with nanoparticles that contain the enzyme luciferase and the molecule luciferin. Together, these chemicals are responsible for enabling fireflies and some jellyfish to glow in the dark through a process called bioluminescence.

Into this liquid solution they then submersed a watercress (Nasturtium officinale) whose tiny pores, known as stromata, on the underside of their leaves absorbed the nanoparticles. The result: the plant started producing light and, after some further tweaking, continued doing so for nearly four hours.

Admittedly, the light thus produced remained quite faint. It was about half as bright as a commercial  1-microwatt LED, which means that we would need several hundred such modified watercress plants on a desk just so that we could comfortably read a book at night by their light.

But the scientists are working on solutions to boost plants’ light-emitting capacity. “Our target is to perform one treatment when the plant is a seedling or a mature plant, and have it last for the lifetime of the plant,” explained Michael Strano, a professor of Chemical Engineering at MIT who worked on the project. “Our work very seriously opens up the doorway to streetlamps that are nothing but treated trees, and to indirect lighting around homes,” he added.

They are hoping to develop a plant that can shut off its glow when it senses sunshine and turn it on only at night. Such modified plants could one day function as street lamps, reducing our dependence on electric lights. Green buildings could also be lit by “collections of glowing plants and designed around an infrastructure of sunlight harvesting, water transport, and soil collecting and composting systems,” MIT explains.

Advances in nanobionic plant technology is fast expanding the architectural possibilities of the researchers’ light-emitting plants. “The transformation makes virtually any plant a sustainable, potentially revolutionary technology,” Strano said. “It promises lighting independent of an electrical grid, with ‘batteries’ you never need to charge, and power lines that you never need to lay.”

One day, once light-emitting plants come into their own, our dependence on the electrical grid for our lights at night could lessen significantly, argues Sheila Kennedy, a professor of architecture at MIT. “People don’t question the impacts of our own mainstream electrical grid today. It’s very vulnerable, it’s very brittle, it’s so very wasteful and it’s also full of toxic material,” she says.

“Lighting right now consumes a vast portion of our energy demand, approaching close to 20 percent of our global energy consumption, generating two gigatons of carbon dioxide per year,” Strano adds. “Consider that the plants replace more than just the lamp on your desk. There’s an enormous energy footprint that could potentially be replaced by the light-emitting plant.”

The post A bright idea: plants made to serve as lamps at night appeared first on Sustainability Times.