In urban jungles rooftop gardens can make a world of difference 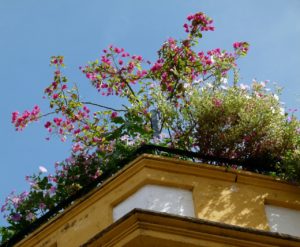 Wherever insects abound, various species of birds tend to thrive, too. Yet invasive agricultural practices, including the use of pesticides, and relentless urban sprawl pose increasing threats to insects, birds and other wild animals, especially in places where space is already at a premium.

But if expanding green spaces horizontally isn’t possible, there is always another way: expanding them vertically.

Rooftop parks and gardens are being adopted in many densely populated cities in what is seen as a solution both to a lack of green spaces in urban areas and food scarcity. Such newly created green spaces can also provide home to wild animals, including butterflies and other arthropods, in addition to birds that prey on them.

As the planet’s population keeps on growing, the restless sprawl of urbanization is inevitable. Yet increases in urban landscapes often mean that adjacent natural habitats are becoming more and more disrupted. As human settlements continue to encroach on the natural environment, many bird species, both native and migratory ones, try to adapt to these new manmade environments in order to survive and reproduce.

Many are adopting, with varying degrees of success, to changes in the landscape by exploiting available green spaces in urban areas. That is why increases in greenery in urban spaces can be a positive influence on species richness and diversity.

Green spaces like parks can serve such a purpose, yet in many already overcrowded cities such spaces are becoming rarer. Not so rooftops, however. Atop apartment and office buildings, whose roofs are directly exposed to the sun’s rays, outdoor gardens can thrive, producing fresh fruit, herbs and vegetables. In many densely populated cities, fresh vegetables produced in such rooftop gardens are becoming common on local markets.

With proper management, coupled with organic farming methods and technological tools, rooftop gardens can produce high enough yields to feed numerous local people. Just as importantly, these green roofs can also serve as habitats in the sky for airborne creates like insects and birds.

New York City is home to many bird species, including migratory ones. During their migrations these birds often make pit stops in the city in search of food, rest and even nests. They look for whatever suitable spaces they can find, which they often do in urban green spaces that can provide them with shelter in a concrete jungle.

A study conducted by the Department of Biological Sciences at Fordham University shows that compared to conventional roofs with no gardens, green roofs attract more varieties and higher numbers of birds. Gardens on rooftops provide a relative abundance and variety of vegetation, which also attracts a lot more insects.

A similar situation is evident in Singapore, which has a total land area of just 721.5 square kilometers but is home to 5.6 million people. Singapore has little land left at ground level for growing food to feed all those mouths. In fact, the country’s agriculture accounts only for about 1% of total land area. This means Singapore needs to import vast amounts of food from other countries.

Enterprising locals are greening rooftops by setting up leafy gardens atop buildings so as to alleviate the chronic shortage of locally grown food. A local company called ComCrop specializes in setting up rooftop gardens equipped with advanced features such as vertical racks and hydroponics. Fresh vegetables grown this way are delivered to local bars, restaurants and stores.

“Agriculture is not seen as a key sector in Singapore. But we import most of our food, so we are very vulnerable to sudden disruptions in supply,” said Allan Lim, ComCrop’s Chairman and Founder. He continued: “Land, natural resources and low-cost labour used to be the predominant way that countries achieved food security. But we can use technology to solve any deficiencies.”

City planners, too, support rooftop gardens in order to double the size of the city’s green spaces by 2030. “An appreciation and love for greenery is now core to Singapore’s national identity,” said Desmond Lee, Second Minister at the Ministry of National Development.

The animals have taken to using these green spaces in the sky for finding food and mates and nurturing their offspring in nests.

The post In urban jungles rooftop gardens can make a world of difference appeared first on Sustainability Times.