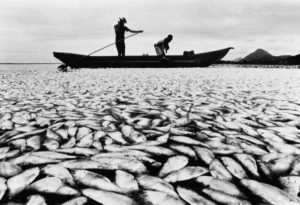 Just as in sport, so in environmental protection, receiving a yellow card is an indication that you’ve committed a bad foul. You’ve been issued a warning to mend your ways. The European Union hands out yellow cards to countries that it considers to be in violation of sustainable fishing practices.

In an attempt to get their yellow card (or “warned status”) lifted, these countries can improve the management of their fisheries by tackling illegal, unreported and unregulated (IUU) fishing practices that pose dangers to aquatic resources in their national waters.

IUU fishing usually happens in countries with weak fisheries management and lax law enforcement. Harmful and unsustainable fishing practices can deplete marine resources, leading to the collapse of local fisheries. If a country fails to improve its record, it could find itself red-carded and thus banned from the lucrative EU market for its marine products.

Thailand, a country famed for its seafood, was handed a yellow card in 2015. The status, however, was withdrawn this past January as the Southeast Asian nation was found to have made substantive progress in addressing shortcomings in its fishing practices. The Thai government’s attempts at doing so have included regulating the mesh sizes in trawl fishing nets in order to reduce bycatch.

Yet despite such progress, marine fish stocks in Thai waters continue to be depleted. The country’s National Fisheries Association has warned that short-bodied mackerel (known as the “fish of the nation” locally because they are highly popular domestically) may go extinct from the Gulf of Thailand in a few years unless immediate action is taken.

Every year the Department of Fisheries closes the upper part of the Gulf of Thailand during the breeding season for various species of fish, including short-bodied mackerel. Various pelagic fish start migrating from the south of the Thai Gulf to its northern part to find spawning grounds. During this period, fishing boats are not allowed in select areas.

Yet many local fishermen continue to flout this ban by illegally catching adult female fish during their breeding season, which can greatly reduce the number of newly spawned fish. As a result, local stocks of numerous fish species can be depleted within just a few short years.

The difficulty of protecting aquatic resources in Thailand is reflected by the plight of mackerel in local waters. As overfishing and illegal fishing continue to harm marine ecosystems, domestic fish stocks are dwindling fast. Soon fish will hardly be enough for domestic consumption, let alone for foreign exports.

Local experts stress that forbidding the use of certain net types, and enforcing that ban rigorously, can make a big difference to fish populations. “I put my position at stake,” Mongkol Sukcharoenkhana, president of the National Fisheries Association of Thailand, wagers. “I will quit [my job] if the Fisheries Department strictly forbids the use of gill nets during the short-bodied mackerel’s egg-laying season, but the number of short-bodied mackerel does not increase.”

Many local fishermen are devastating marine systems by blast, or dynamite, fishing. During this ecologically destructive practice fishermen throw homemade explosives into the sea, causing a violent blast. Stunned by the blast, fish float to the surface of the water, enabling the fishermen to collect them with little effort.

A myriad of marine species often end up as casualties in the process. That is because the explosion kills or harms not only fishermen’s targeted fish but also various aquatic species from plankton to large fish like sharks. The blasts also devastate reefs, which serve as habitats for numerous fish species and other marine animals, by splintering fragile corals into fragments. “In some dynamited areas, if you dive you don’t see any fish at all,” say Jimely Flores, a senior marine scientist.

Nor is the practice of blast fishing limited to the Philippines. Across much of Southeast Asia, where some of the planet’s most biodiverse marine ecosystems are found, blast fishing remains fairly widespread despite national bans on it. Blast fishing was likely invented in Africa, where it is still a common if illegal practice in countries such as Tanzania, and has spread farther east from there.

“Blast fishing can be lucrative: both from the sale of the fish caught and also from the trade of illegal explosives,” the Food and Agriculture Organization of the United Nations explains. “The blasts shatter the coral, destroying the habitat which results in drastic reduction in catches, affecting food security. It also causes beach erosion as the reefs no longer provide protection from the sea.”

The practice certainly deserves a red card, yet it remains to be seen if countries such as the Philippines can stop this highly destructive practice once and for all.