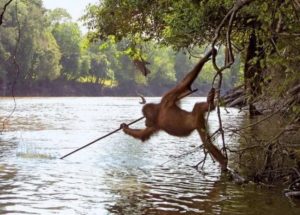 Orangutans are among the smartest creatures on Earth. We’ve long known that. Yet just how smart and inventive they can be continues to surprise us.

Take this latest example: last month a wild orangutan on an island in Borneo was photographed using a spear of sorts in an attempt to catch fish in a river. The male ape did this by hanging over the water from a tree branch and stabbing a long pole into the river repeatedly in the hope of impaling a fish on its tip.

In the end the orangutan failed to land any fish but he surely deserves kudos for trying.

Then again, this burst of inventive tool use by an ape should come as no surprise. Orangutans and other primates from chimpanzees to capuchin monkeys have long been known to employ various objects as tools for cracking nuts and other tasks.

That is no mere hyperbole. In 2017 a young orangutan at the Nyaru Menteng rehabilitation center in Central Kalimantan, Borneo, was filmed donning an old sack. He then set about accosting a friend from behind in a forested area the same way children would play peekaboo to scare or entertain their pals. The young orangutan persisted with this stunt until its friend finally took the bait and began play-wrestling for a bit of a lark.

People often anthropomorphize animals by attributing human-like thoughts and behaviors to them. Yet in many ways higher apes like orangutans are very similar to us. The Malay word from which the name “orangutan” has been bequeathed to us means “person of the forest,” indicating that locals thought of the animals as people in some other form.

Yet these wondrous creatures are now critically endangered in the forests of Borneo as a result of massive devastation caused by humans. Orangutans in the jungles of the island, which is shared by Malaysia and Indonesia, have lost much of their natural habitat to logging and land clearing for agriculture.

Scientists from the Carnegie Institution for Science in Washington, D.C., have reported that critically endangered orangutans are fleeing from encroaching development on local forests by seeking refuge in denser vegetation in the hope of staying out of sight and harm’s way. They do so by retreating to higher trees deeper in the woods in disturbed forests.

Orangutans need plenty of tall trees with dense canopy in close proximity to one another so that they can move about without the risk of branches breaking under their weight. Keeping tall, robust trees intact will be vital for orangutan conservation efforts in Borneo’s remaining forests.