Tiny spirals could help rid the oceans of microplastics 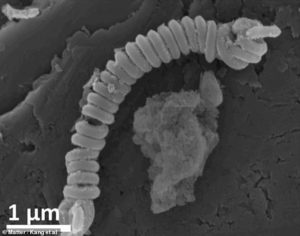 Polluting the environment is a bit like making a mess in your room. It’s pretty easy to make the mess; it’s a whole lot harder to clean it up. That’s especially so when the “room” is the size of the entire planet.

A case in point is plastic pollution. It started off small in the 1950s when plastics began to be mass-produced, but over the decades plastic pollution has reached endemic proportions. Plastic waste, usually in the form of microplastics, now covers everything from the top of the highest mountains to the deepest recesses of the oceans.

Cleaning it all up might well be impossible. Even cleaning some of it up will be a Herculean undertaking, particularly because we continue adding to it with upwards of 8 million tons of plastic waste dumped into the seas each year.

But that does not mean we should not keep trying. One such effort comes in the form of a scientific paper in which a team of Chinese researchers proposes “providing a green strategy by integrating state-of-the-art carbocatalysis and nanotechnology for remediation of MPs contamination in water.”

Specifically, the scientists say that the tiny spring-like carbon nanotubes with magnetic properties they have created could be deployed so as to break down microplastics in the ocean through chemical reactions. The nanotubes are coated with two compounds (nitrogen and manganese), which interact with the tiny coils to create highly reactive oxygen molecules.

These molecules have the effect of converting microplastic pollutants into carbon dioxide, salt compounds and water. During trials the miniature coils, when released into water polluted with microplastics, led to a reduction of between 30% to 50% in their volume in just eight hours.

“Microplastics adsorb organic and metal contaminants as they travel through water and release these hazardous substances into aquatic organisms when eaten, causing them to accumulate all the way up the food chain” says the study’s senior author Shaobin Wang, a professor of chemical engineering at the University of Adelaide.

“Carbon nanosprings are strong and stable enough to break these microplastics down into compounds that do not pose such a threat to the marine ecosystem,” Wang adds.

By using magnets, the nanocoils were then retrieved for later use elsewhere. “Having magnetic nanotubes is particularly exciting because this makes it easy to collect them from real wastewater streams for repeated use in environmental remediation,” says Xiaoguang Duan, a research fellow in chemical engineering at the University of Adelaide who co-led the project.

Better yet: the scientists say their nanotubes should prove harmless to aquatic environments. “The spiral architecture and highly graphitic degree guaranteed the superb stability of the carbocatalysts in HT environment,” they write. “The toxicity tests indicated that the organic intermediates from MPs degradation were environmentally benign to the aquatic microorganisms and can serve as a carbon source for algae cultivation.”

Exciting, yes. The coils, though, will have yet to be tested in a real-life environment outside a lab. The researchers will also have to make sure that their nanosprings work on microplastics of different compositions, shapes and origins.

Meanwhile, further research could help turn the byproducts of the chemical decomposition of microplastics in the sea into an energy source for marine microorganisms. “If plastic contaminants can be repurposed as food for algae growth, it will be a triumph for using biotechnology to solve environmental problems in ways that are both green and cost efficient,” Wang says.

The post Tiny spirals could help rid the oceans of microplastics appeared first on Sustainability Times.