Growing cover crops can help save pollinators and birds 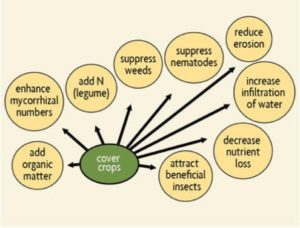 Species of arthropods and other small animals play a key role in global food production, serving as they do as pollinators for cultivated plants. Yet in the next few decades an estimated 40% of insect species around the world may go extinct in what experts have called an ongoing “insect apocalypse.”

Should that happen, food security worldwide would be severely threatened, especially with climate change also having harmful impacts.

Why insect are going extinct isn’t a mystery. The main factors are habitat loss, pesticide use and pollution. As more and more land is converted into agricultural and urban areas, wildlife habits are also shrinking, squeezing a myriad of species into ever smaller patches of uncultivated land.

A sharp decline in pollinator populations is a global problem, affecting the agricultural sector far and wide. Scientists are trying to find ways to alleviate the situation. An important recent study reveals one way to help save insects: by planting cover crops in off-seasons so as to provide food for threatened arthropod species like bees.

In the United States, animal pollinators are vital to one third of agricultural production. Yet the country’s agricultural areas are putting various insect species in danger.

According to a study, because of the widespread use of neonicotinoid pesticides many farmlands are a staggering 48 times more toxic to insects than a quarter century ago. Neonicotinoids account for a 92% increase in toxicity.

Honey producers, especially in Midwest states like Minnesota, South Dakota and North Dakota which are home to most of the nation’s bee colonies, have been falling on harder times as a result of the mass extinction of bees. Scientists at the U.S. Department of Agriculture (USDA) suggest that winter camelina (Camelina sativa) can serve as a suitable winter cover crop that can produce plenty of food for honey bees and other pollinators.

A cover crop is grown after a main crop has been harvested in the fall with the aim of holding the topsoil in place by preventing it from wind and water erosion until the spring comes when the climate is beneficial again for new seeds. Many cover crops widely in use can suppress weeds and they can reduce nitrate and phosphate leaching by sucking up these minerals from the soil.

During the early spring nectar, which is a primary food source for pollinators, is usually scarce. Oilseeds like camelina, however, are full of yellow flowers which attract various insect species with their nutrient-rich sugary fluid. Camelina grown on 1 acre of land can produce as much as 45kg of nectar and 27kg of pollen.

Migratory birds can also benefit. A variety of migratory birds once used grasslands in the Midwest as pit stops in search for food and rest en route to their destinations. Yet many of those open grasslands are no more, having been replaced by agricultural plots. The birds are now looking for suitable spaces available in these areas. Cover crops can help them by providing food and temporary habitats.

“We think cover crops, such as cereal rye, likely provide migrating birds with more vegetation and a safe area to escape from the elements and from predators,” says Cassandra Wilcoxen, a researcher at the University of Illinois. “Cover crops also increase insect abundance, another food source for birds,” she adds. “The increased number of insects allows migrants to fuel up faster and move on to their breeding grounds.”

The post Growing cover crops can help save pollinators and birds appeared first on Sustainability Times.