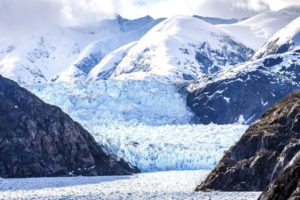 A picture is worth a thousand words, a truism has it, and “before and after” pictures can certainly tell telling tales. A case in point: images by photographer Larry Pannell, who has been taking pictures of the Sawyer Glacier in Alaska during return visits since 2012. The image Pannell on his last trip this summer contrasts sharply with the photo he took seven years ago.

Namely: a significant loss in the ice cover is noticeable. “Although I have witnessed the retreat of many glaciers, it is hard to notice the difference when you visit year after year,” the photographer explains. “That changed this year when for the first time in seven years I returned to the Sawyer Glacier.”

Since he last saw the glacier three years ago half of it had completely disappeared, Pannell says. “Returning to my cabin I took my book on Alaska off the shelf and began to compare before and after shots,” he says.

“My heart broke, it ached, and my eyes began to tear as I realized two-thirds of the Sawyer Glacier had disappeared over a seven-year period,” the photographer laments.

Nor is this glacier alone in losing much of its ice covering to climate change with ever-warming temperatures. Scientists have warned that glaciers worldwide are undergoing radical changes with some of them expected to disappear altogether in coming decades.

In Alaska, where the temperature has risen twice faster than the global average over the last 50 years, the situation is especially bleak. Yet similar trends are occurring in the Alps, the Andes, and the Himalayas.

Meanwhile, in Iceland a glacier called Ok is not ok, either. “The ice field that covered the mountain in 1900 — close to six square miles — has now been replaced by a crater lake,” the country’s prime minister Katrin Jakobsdottir writes in an op-ed published in The New York Times. “It is certainly beautiful, surrounded by patchy snowfields, and is now the highest lake in Iceland,” she observes.

“But that beauty quickly fades in the eyes of anyone who knows what was there before and why it is no longer there,” Jakobsdottir adds. “Ok’s disappearance is yet another testimony of irreversible global climate change.”

Ok isn’t alone in Iceland in losing most of its ice. The Okjökull glacier in Iceland’s Central Highlands covered 38 square kilometers and century ago but by 2005 it had nearly disappeared. In 2014, Okjökull lost its status as a glacier and is now a volcano minus any ice covering on it.

Last Sunday people in the country held a “funeral” for the glacier during which they installed a memorial plaque at the site. “I hope this ceremony will be an inspiration not only to us here in Iceland but also for the rest of the world, because what we are seeing here is just one face of the climate crisis,” Jakobsdottir said.