The closer sharks live to us, the worse off they are 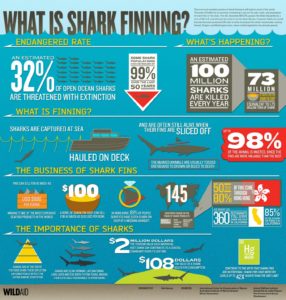 The closer sharks live to humans, the worse off they are. Conversely, the farther away they are from human populations, the better their chance of surviving, according to a new study.

These findings may be stating an obvious fact not only about sharks but wildlife in general: proximity to people rarely benefits most species.

Yet the researchers behind the study, which was led by the Zoological Society of London, quantify matters. They have done so by analyzing video footage taken at 1,041 sites across the Indian and Pacific Oceans so as to observe a wide range of conditions and habitats for sharks and other free-swimming marine predators.

“Sites varied in proximity to fish markets and human populations, with some close to cities and others up to 1,500 kilometres away,” explain the scientists, who also studied starks in the wild by employing cameras attached to cannisters filled with bait. In total the scientists recorded 23,200 animals from 109 different species, included 841 individual sharks from 19 species.

What they found was that sharks’ average body size and their numbers falls considerably the closer they are to communities with more than 10,000 people who include those that make a living out of fishing. Sharks that live at least 1,250 kilometers away from any human settlement, however, are still doing well. Considerable distances serve to offer relative safety because of the limited range of fishing boats.

“Human activity is now the biggest influence on sharks’ distribution, overtaking every other ecological factor,” explains Tom Letessier, a marine ecologist at SL’s Institute of Zoology. “Just 13% of the world’s oceans can be considered ‘wilderness’ but sharks and other predators are much more common and significantly larger at distances greater than 1,250 kilometres from people,” he adds.

In addition, the scientists found that shallower waters, which are less than 500 meters deep, are vital for marine predator diversity. “We therefore need to identify sites that are both shallow and remote and prioritise them for conservation,” Letessier notes.

“However, there are still numerous shallow hotspots in the vicinity of human markets that are not appropriately protected, and this must change. Existing large, no-take MPAs (Marine Protected Areas) need to be better enforced and extended to focus on the last refuges where these extraordinary animals remain abundant,” he adds.

Sharks belong to around 440 species, but the relentless slaughter has caused a quarter of shark species to be threatened or outright endangered. Sharks play a vital role in marine ecosystems as top predators by controlling populations of prey species. They keep those populations healthy by removing sick and injured animals.

Yet each year tens of millions of sharks large and small are killed by people for their fins, which are used in shark fin soup. Encouragingly more and more countries are banning or clamping down on shark finning and shark fin soup.

The post The closer sharks live to us, the worse off they are appeared first on Sustainability Times.