Fires in the Amazon could send unique ecosystems up in smoke 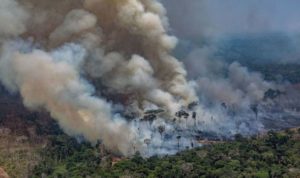 “It was as if the day had turned into night,” Gianvitor Dias, a resident of Sao Paulo, lamented after wildfires began consuming many of the Amazon’s rainforests. Plumes of smoke covered much of the sunlight and turned the city into semi-darkness. “Everyone here commented, because even on rainy days it doesn’t usually get that dark,” he added.

According to Brazil’s National Space Research Institute (INPE), in the absence of effective action to protect them, forests in the Amazon, which is home to the world’s largest tropical rainforest, will likely be replaced by a grassland savanna by the end of the century. Such changes are driven by an increase in temperatures as a result of climate change, coupled with a substantial decline in precipitation across the region.

Yet even this prediction might be too optimistic. The Amazon’s forests are being destroyed at an alarming rate through fires, many of them likely set deliberately. The number of wildfires in the Amazon rainforests this year has hit a record of more than 74,000, according to INPE. Compared to the same period last year, this year’s numbers of wildfires have increased by 84%. Deforestation rates in the Amazon have also been growing since last year.

The drastic increase is largely the result of forest fires, most of which have taken place within just the past three weeks. Every minute an area of forest the size of a football pitch is being lost to fires and deliberate clearing, INPE says. Unless slash-and-burn forest clearing is stopped, large swathes of the Amazon could soon reach a tipping point.

Unique ecosystems would disappear or greatly diminish as a result. “We might be very, very close to the tipping point,” said Carlos Nobre, a climate scientist at the University of Sao Paulo, adding that once a threshold is crossed, the damage could well be “irreversible.”

The Amazon forest spans over 5.5 million square kilometers. Known as the planet’s lungs, local forests generate a fifth of the oxygen in the planet’s atmosphere and absorb vast amounts of CO2 from the atmosphere. The Amazon’s tropical rainforests cover almost 60% of Brazil and extend into other South American countries. These rainforests are home to nearly 30% of the world’s fauna and flora.

A loss of the forests would mean a massive loss of biodiversity not only in Brazil but globally as well. And there is little the forests themselves can do to protect themselves. Tropical rainforests produce plenty of moisture and humidity that can largely protect them from wildfires. Yet in a drying climate, deforestation and human activities like setting fires are reducing local forests’ fire-resistant capacities.

This can lead to an increase in wildfires across forest areas, according to NASA. “The intensity and frequency of droughts in turn, have been linked with increases in regional deforestation and anthropogenic climate change,” the U.S. space agency said.

In Amazon countries cattle ranching is a mainstay of the local economy. However, animal husbandry requires large areas of unwooded land. As a result, fires are often set by ranchers to clear forests. The intensity of animal husbandry in the area accounts for as much as 80% of the current deforestation rate.

“It’s the best time to burn because the vegetation is dry,” CNN meteorologist Haley Brink said. “[Farmers] wait for the dry season and they start burning and clearing the areas so that their cattle can graze. And that’s what we’re suspecting is going on down there.”

Natural wildfires in rainforests, including the Amazon, are especially common in drier months. However, natural fires tend to remain small in scale, consuming mostly leaf litter and other dry matter. They rarely affect tall trees or their canopies higher up. Plants and animals in the Amazon rainforests are not well adapted to unusually intensive fires.

This means that raging fires can devastate indigenous species thriving in the Amazon to an extent that they may never recover. Many animal species like sloths, anteaters, amphibians as well as lizards are slow-moving and so are unable to escape from the heat, flames and smoke.

In long-term the burning fires could mean that the local rainforests’ ecosystems will be changed dramatically. The forests covered by dense canopies will be opened up by fires. Some species might benefit from this altered state of the rainforests, but most will not. For instance, animals that use camouflage and blend into their surroundings to protect themselves from predators will be more exposed to these predators without the benefit of enough foliage.

Likewise affected will be bird species that are dependent on niches deep within forests. They will be forced to relocate to other areas where they will have to compete with other species. “In a system that isn’t adapted to fire, you’ll have a lot more losers than you will in other landscapes,” said Mazeika Sullivan, an associate professor at Ohio State University’s School of Environment and Natural Resources.

Some conservationists have blamed Brazil’s government under President Jair Bolsonaro for the wildfires. Many government policies favor business sectors that are exploiting the Amazon, including loggers, miners and farmers. When he was running for president Bosonaro campaigned on exploring the economic prospects of the rainforests.

“For Jair Bolsonaro, Brazil’s wealth is in its industry,” said Marie-Pierre Ledru, a specialist in the Amazon. “He wants to transform the Amazon into an enormous plot for soy. Brazilian agricultural lobbies have started to explore the north of Amazonia with the aim of growing crops there when there’s winter in the south. The Brazilian president supports these efforts.”

The post Fires in the Amazon could send unique ecosystems up in smoke appeared first on Sustainability Times.