Wind power has yet to come into its own in Europe 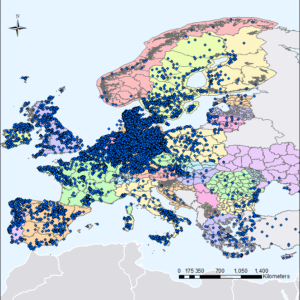 If you drive around Europe, you’re bound to encounter wind turbines spinning by the side of roads. Offshore wind farms, too, are springing up here and there in a continentwide drive for more renewables. Yet the potentials of wind energy remain largely untapped across Europe, experts say.

To wit: the continent could produce more than 100 times the amount of energy it currently produces from onshore windfarms, which could power the entire planet, say researchers from the University of Sussex in England and Aarhus University in Denmark. Onshore windfarms could add a whopping 52.5TW to Europe’s energy output, or 1MW for every 16 locals.

There is a caveat, though: that great boost in onshore wind energy would require another 11 million turbines, which could take up plenty more land.

With the help of spatial analysis of wind atlases the scientists identified areas that would be suitable for the siting of new onshore wind farms. The researchers took into account “exclusionary factors including houses, roads, restricted areas due to military or political reasons as well as terrains not suitable for wind power generation.”

They found that nearly half (46%) of Europe’s landmass could serve as sites for new turbines. That figure translates into almost 5 million square kilometers.

Parts of Turkey, Russia, and Norway would especially be ideal to boost wind power density, but large parts of Western Europe, too, could host plenty more onshore farms thanks to flat landscapes with favorable wind speeds, the scientists argue.

Needless to say, deploying millions of turbines would create a blot on the landscape and could also adversely affect wildlife. Yet the scientists stress that their aim was simply to highlight the potentials of wind energy for Europe and not to argue that all available pieces of land should be converted into wind farms.

“Obviously, we are not saying that we should install turbines in all the identified sites but the study does show the huge wind power potential right across Europe which needs to be harnessed if we’re to avert a climate catastrophe,” cautions Benjamin Sovacool, a professor of Energy Policy at the University of Sussex who was the co-author of a new study.

“The study is not a blueprint for development but a guide for policymakers indicating the potential of how much more can be done and where the prime opportunities exist,” he adds. “[It] suggests that the horizon is bright for the onshore wind sector and that European aspirations for a 100% renewable energy grid are within our collective grasp technologically.”

The European Union is a leader in wind energy with the economic grouping’s onshore and offshore farms accounting for nearly a third of current overall wind capacity globally. The European Commission plans to have at least 100,000 wind turbines in place by 2050 across the continent.

“One of the most important findings of this study, aside from the fact that it concludes that the European onshore wind potential is larger than previously estimated, is that it facilitates the ability of countries to plan their onshore wind resource development more efficiently, thereby easing the way for commitments by these countries to move entirely to clean, renewable energy for all purposes,” observes Mark Jacobson, a professor of Civil and Environmental Engineering at Stanford University.

The post Wind power has yet to come into its own in Europe appeared first on Sustainability Times.