Could drone deliveries help us reduce our carbon footprint? 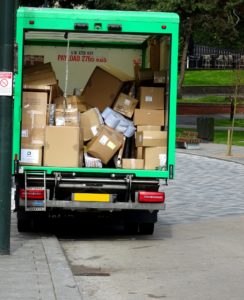 Around much of the planet drones are being increasingly deployed to help us save the environment. They can be useful as our airborne allies for keeping a beady eye on illegal loggers.

They can help us monitor the status of endangered species. And they can assist scientists in observing marine animals like turtles.

But that’s just for starters. Drones can also help reduce our carbon footprints. Significantly so.

According to a team of researchers, the delivery of commercial packages by drones could help us cut back on CO2 emissions. That’s because, by and large, drones consume less energy per kilometer in delivering a package than delivery trucks do.

“[I]n most cases examined, the impacts of package delivery by small drone are lower than ground-based delivery,” the researchers write in a paper published recently in the journal Nature Communications.

“Results suggest that, if carefully deployed, drone-based delivery could reduce greenhouse gas emissions and energy use in the freight sector,” they explain. “To realize the environmental benefits of drone delivery, regulators and firms should focus on minimizing extra warehousing and limiting the size of drones.”

In the United States alone, delivery trucks emit around 415 million metric tons of carbon dioxide each year, accounting for a quarter of all emissions from transportation in the country. Some of that vast carbon footprint could be erased if drones were used instead for deliveries, the scientists argue.

In other words, the energy saving gained by the use of drones could be offset by the added investment of energy spent on building warehouses.

Still, if used judiciously, drones could help us save on energy and reduce our impact on the environment. In addition, as battery and unmanned aerial systems technologies improve, drones could soon travel longer distances with less energy. That matters because more and more companies, including giants like Amazon, are working on ways to deliver packages to customers by drones. If they could do so by having a positive environmental impact, all the better.

The post Could drone deliveries help us reduce our carbon footprint? appeared first on Sustainability Times.