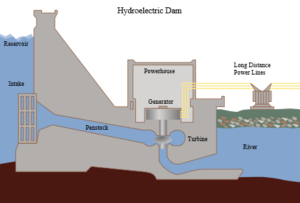 The United States has more than 2,600 hydropower dams, which together provide 6% of domestically generated electricity. Yet hydropower, despite being a renewable source of energy, isn’t an unmitigated blessing. Far from it. Dams can wreak havoc with aquatic environments and can cause massive destruction in the case of floods.

The authors of a new study in the journal Nature Sustainability has an answer: converting dams, or parts of them, into solar farms.

“[W]e estimated that 529,885 ha of PVs would be needed to replace the generation of all 2,603 hydro-dams — an area approximately equal to the land size of Delaware. PVs could replace the total annual energy produced from these dams while requiring only 13% of their existing reservoir area,” they write.

“If all the hydro-dams in the United States were removed and only 50% of the emergent land was used for PVs, 945,062 GWh yr −1 power could be generated, which is 3.44 times the current hydropower generation,” the researchers explain.

They caution that their analysis is theoretical and does not take into account costs that would vary from site to site. Replacing dams with solar panels without more efficient energy storage could not replicate the dispatchability and grid services provisions of existing hydropower facilities, either.

“[H]owever, improving battery storage capabilities may ameliorate this shortcoming,” they say. “We suggest that PVs could replace much of the annual electricity output of hydro-dams in the United States while using substantially less land area and providing considerable environmental and ecological benefit.”

Yet in the process the environmental costs became considerable. The creation of reservoirs caused large areas of land to be permanently submerged in water, often destroying biodiverse forests, marshlands and grasslands. Damming also interferes with local aquatic ecosystems, especially impacting migratory fish such as salmon by blocking their migratory routes.

John Waldman, a conservation biologist at the City University of New York who led the new study, notes that dams across the United States have dealt “tremendous harm” to ecosystems, both on land and in water, by fragmenting wildlife habitats and disrupting migration patterns. Faced by pressure from environmentalists, more than 1,000 dams have been dismantled in the country in recent years.

“On the Atlantic Coast, the precedent-setting removal of the Edwards Dam on the Kennebec in 1999 opened 17 miles of main stem river, also allowing river herring to reach the tributary Sebasticook River for the first time in 162 years,” Waldman writes. “River herring numbers exploded there, going from zero to a million-plus one year later, to more than six million in 2019.”

If only half of the remaining reservoirs were drained and their land area was covered with solar panels, the result would be a great boost to energy efficiency, the researchers say. The newly installed solar banks could produce nearly three and a half times the amount of energy currently generated by hydropower.

“On the state level, California could replace all of its 339 hydro-dams with PV comprising about 0.1% of the state’s land area,” Waldman says.” Florida could replace its four hydro-dams that impound 26,520 hectares with just 342 hectares of PV, i.e., the size of New York City’s Central Park.”

The post Converting hydro-dams into solar farms would be a ‘boon’ to the US appeared first on Sustainability Times.