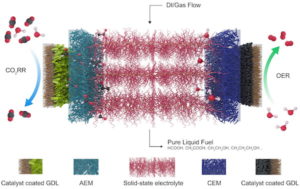 CO2 is building up in the atmosphere at alarming rates, but plans are on the way to suck at least some of the greenhouse gas out of it. The question, though, is what to do with CO2 once it’s harvested from the air? Lock it up and store it somewhere? Or repurpose it for profitable new uses?

A team of scientists at Rice University proposes one solution in the latter category: recycling CO2 for liquid fuel. Or formic acid, to be more precise.

Formic acid, which occurs naturally in nettles and ants, is an energy carrier that results from a chemical reaction between water and carbon dioxide. It can be produced with electricity in a laboratory. When used in a fuel cell, formic acid is split into water and CO2, which are then emitted during a process that can be harnessed to power an engine.

In 2017 students at a technical university in Eindhoven, in the Netherlands, made a city bus that runs on formic acid in an attempt to show that the acid could be a viable alternative for electricity and hydrogen to power ecofriendly vehicles in a cheaper way. “For hydrogen, an investment of a few million euros for each filling station is required. Formic acid is more than 10 times cheaper,” noted Max Aerts, the head of the research team.

Now, in a next step forward for the use of formic acid as a viable liquid fuel, the researchers at Rice University in Houston, Texas, have built an electro-catalysis reactor that uses carbon dioxide as its feedstock and produces purified formic acid in high concentrations.

If done with traditional carbon dioxide devices, formic acid production requires energy-intensive purification steps, which are costly, explains the leader of the research team, chemical and biomolecular engineer Haotian Wang, who is an author of a new study in the journal Nature Energy.

The direct production of pure formic acid solutions will help to promote commercial carbon dioxide conversion technologies, Wang adds. During tests conducted in the laboratory the team’s electrocatalyst produced an energy conversion efficiency of around 42%, which means that half of the electrical energy can be stored in formic acid as liquid fuel.

“[Formic acid] is a fuel-cell fuel that can generate electricity and emit carbon dioxide — which you can grab and recycle again,” Wang explains.

“It’s also fundamental in the chemical engineering industry as a feedstock for other chemicals, and a storage material for hydrogen that can hold nearly 1,000 times the energy of the same volume of hydrogen gas, which is difficult to compress. That’s currently a big challenge for hydrogen fuel-cell cars,” he adds.

During the process the researchers coated a polymer-based solid electrolyte with sulfonic acid ligands to conduct positive charge or amino functional groups to conduct negative ions. “Usually people reduce carbon dioxide in a traditional liquid electrolyte like salty water,” Wang says. “You want the electricity to be conducted, but pure water electrolyte is too resistant. You need to add salts like sodium chloride or potassium bicarbonate so that ions can move freely in water,” he adds.

“But when you generate formic acid that way, it mixes with the salts,” he goes on. “For a majority of applications you have to remove the salts from the end product, which takes a lot of energy and cost. So we employed solid electrolytes that conduct protons and can be made of insoluble polymers or inorganic compounds, eliminating the need for salts.”

The process will still need to be fine-tuned so as to increase its efficiency, but this line of research can be promising as part of ongoing climate change mitigation efforts, Wang stresses.

“The big picture is that carbon dioxide reduction is very important for its effect on global warming as well as for green chemical synthesis,” he says. “If the electricity comes from renewable sources like the sun or wind, we can create a loop that turns carbon dioxide into something important without emitting more of it.”