Bananas could soon be gone due to diseases and climate change 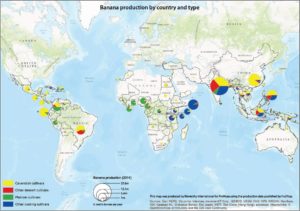 Traditional weather patterns are changing across much of the planet and as a result crop failures and food shortages will become increasingly likely in some parts of the world. One crop that is likely to be badly affected in coming years is one of people’s all-time favorite fruits: bananas.

A team of scientists at the University of Exeter in the United Kingdom has examined the effects of climate change on the planet’s leading banana producers and exporters. What they found is that  in 27 countries, which account for 86% of global dessert banana production, crop yields have increased since 1961. That is largely thanks to more favorable growing conditions brought on by changing weather patterns and production methods.

Yet by 2050 these robust yields could have severely diminished because of adverse conditions triggered by climate change, they warn. The scientists predict that as many as 10 countries, including India and Brazil (two of the leading producers of bananas), will experience marked drops in their yields. The other major banana-growing countries that could potentially see strong declines in their yields of the fruit include Colombia, Costa Rica, Guatemala, Panama and the Philippines.

“We’re very concerned about the impact of diseases like Fusarium wilt on bananas, but the impacts of climate change have been largely ignored,” Dan Bebber, a lecturer in microbial ecology at the Department of Biosciences at the University of Exeter. “There will be winners and losers in coming years, and our study may stimulate vulnerable countries to prepare through investment in technologies like irrigation.”

Bananas are cultivated in 120 countries across the tropics and subtropics from South America to Africa to Southeast Asia. Collectively, these countries produce 114 million tons of the fruits each year. Bananas  come in more than 1,000 varieties, although the highly popular Cavendish cultivar accounts for nearly half of all banana production. The fruits are a key crop for millions of people worldwide. In Britain alone more than five billion bananas are purchased each year. The country accounts for 7% of the global export market in yellow fruit.

Yet several strains of a fungus are posing grave threats to the world’s banana plants, according to a recent study by researchers in the US and the Netherlands. In fact, the fungi, if left unchecked, could wipe out the planet’s entire crop of the essential fruit within years.

The three strains could prove fatal to banana trees by compromising their immune systems and undermining their metabolism by feeding on host plants’ sugars and other carbohydrates. Worse: the fungi could spread with alarming speed around the globe. In the 1950s, a deadly strain of the Panama disease, a soil-borne fungus that attacks plants’ vascular systems through their roots, did just that, wiping out almost all of the popular Gros Michel (“Big Mike”) bananas in Central and South America.

As Gros Michel bananas went nearly extinct, cultivators switched to Cavendish bananas, which were resistant to the disease-causing fungus and have since become ubiquitous in supermarkets worldwide. But then in the 1990s a new strain of the fungus, which originated in Taiwan, began to spread worldwide. Cavendish bananas have been under threat ever since.

To make matters worse, bananas are grown from shoot cuttings and all the Cavendish bananas have been grown from a single plant, which means they are genetically identical clones of one another. With their limited genetic diversity, they are all the more susceptible to devastating diseases. A disease that can kill one plant can kill them all with equal ease.

The post Bananas could soon be gone due to diseases and climate change appeared first on Sustainability Times.