Invasive pythons are a grave threat to wildlife in Florida 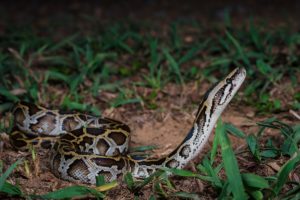 The Everglades National Park in Florida was once home to plenty of bobcats, opossums, raccoons and rabbits, yet the numbers of these mammals have plummeted drastically in some areas. The culprit behind the disappearance of those animals has been a reptilian species that arrived in the national park only in the recent past. That species is the Burmese python.

The pythons are great at camouflage, a skill that allows them to blend into a wide range of environments. The constrictors patiently bide their time for prey in hiding before they launch an ambush on their targets. Many local species are ill equipped to resist.

As their name suggests, Burmese pythons are native not to North America but to South and Southeast Asia. They were either released intentionally in the wild in Florida or else escaped from their confinements as pets in the late 1970s. Now tens of thousands of the pythons are believed to infest the area, posing a lethal threat to a variety of local animals.

These Burmese pythons in Florida are an example of the hazards that invasive species can pose to delicately balanced ecosystems. Conservationists have been trying to eradicate the pythons from the area but so far unsuccessfully. Snakes that are captured by dedicated teams of volunteers are euthanized and if female snakes are found to be carrying eggs, the eggs will be destroyed as well.

Yet these rearguard actions are an uphill struggle for the most part. The pythons are a highly fecund and resilient species. A sizeable pregnant female captured in the Everglades last April was so large and heavy that several people had to carry her. She was 5.2m long and weighed 63.5kg.

The female python was tracked down after local snake catchers belonging to the Python Action Team had equipped a male python with a radio transmitter and the male led them to her. This approach is now being used in the Florida Everglades to locate females before they can lay new eggs.

A few days ago a 5.5m specimen, the second largest caught in Florida so far, was captured by members of the Action Team. Just a few hours later another large snake was captured.

Two down, plenty more to go.

“I wish we could eradicate this species, but I think they are established,” said Cheryl Millett, the manager of the Nature Conservancy’s Tiger Creek Preserve in central Florida. “One of the problems with the Burmese python is that it’s an invasive species getting in the way of the area’s natural functioning system. That is why we are trying to eradicate it,” Millett added.

The post Invasive pythons are a grave threat to wildlife in Florida appeared first on Sustainability Times.