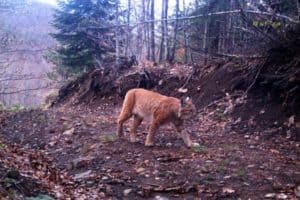 The Balkan lynx is the rarest of rare wild cats. The predators, which make their home in the mountains of the Western Balkans, feature prominently in the folklore of Albania and Macedonia, and sadly they do seem these days to be little more than mythical creatures.

This critically endangered feline subspecies (Lynx lynx balcanicus) numbers somewhere between a mere 40 and 70 individuals in the wild across several Balkan nations, although in the 1970s some 280 lynxes still roamed the mountains and alpine forests of Macedonia, Montenegro, Albania and Kosovo.

For years a team of Macedonian scientists has been trying their best to bring the endemic lynxes back from the edge of extinction with a measure of success. The reasons for the animals’ demise in their mountainous terrains have included the usual causes: poaching, deforestation and habitat loss.

As recently as in 2015 a baby lynx was killed by a hunter in the forest of Munella mountain in Albania, sparking outrage in the country. In January this year a man in Kosovo was arrested for killing a lynx the previous month. He boasted about the kill in a Facebook post.

Locals in Albania once thought that staring into the eyes of a lynx would make them go blind. There’s little danger of that happening because sightings of the endangered and elusive cats are very rare. They are so rare, in fact, that the mere sighting of a live lynx in the wild can make the headlines. Although a few dozen lynxes may still roam  across Kosovo, Macedonia and Albania, camera traps in Kosovo’s Bjeshket e Nemuna national park have so far captured images of only two individuals in the country.

A United Nations-led study was recently conducted on the status of wildlife of Shar Mountain in Macedonia, which some Balkan lynxes also call home, as plans are underway to step up conservation efforts in the area. “[I]llegal poaching, the decline of prey, landscape degradation and construction are posing grave threats to the region’s largest cat,” the UN notes.

“Establishing integrated nature protection and ensuring favourable status of conservation of species and their natural habitats is a priority objective,” explains Biljana Zefic, a former director of the Administration for Environment at the Balkan nation’s Ministry of Environment and Physical Planning.

Improved conservation efforts will be key to ensuring that the beleaguered cats can hang on with tooth and nail in their habitats, along with several other endangered species in the area’s forests. So will the rigorous prosecution of poachers.