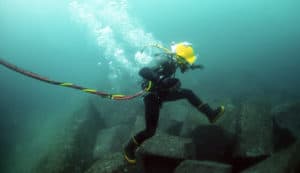 Toxins from hazardous materials, if not disposed of safely, could poison water sources and accumulate in the soil. Take wind turbines. The average lifespan of a turbine is around 20 to 25 years and many active wind turbines across Europe are nearly at that age. Decommissioning them could have environmental impacts, if not done properly. The same goes for solar panels as well.

In light of this, it is important to try and insulate wild animals from the effects of energy installations. Recently, the EU published a guide called “Guidance on Energy Transmission Infrastructure and EU Nature Legislation.”

“By allowing everybody involved in the preparation of renewable energy projects to consider environment early in the process, they will facilitate projects that work with nature, and not against it,” Vella added.

Designed for use by government agencies, project developers, experts and NGOs alike, the guidelines emphasize the importance of strategic planning in infrastructure developments so that they alleviate adverse effects protected species and their habitats.

Among its mitigation measures, the authors recommend assessing the status of wildlife habitats before construction is approved and devising alternative routing if necessary, especially in and near Natura 2000 sites. They also suggest reducing the size of cable trench corridors and limiting the number of connections between pieces of infrastructure in marine environments to limit the extent of disturbances to the seabed. In addition, all construction should be carried out with the minimum of noise and visual disturbances.

Making renewable energy more wildlife-friendly is possible if new installations are preceded by careful study and forethought. New wind farms should be located in areas where they have less of an impact on birds and bats. New renewable installations should also be done in ways that do not drive habitat fragmentation. Even the environs of nuclear power plants can be made to serve as wildlife protection zones.

“Traditionally, energy developers and land managers have chosen project sites by focusing on the available energy resource. [T]hinking about how those projects might affect natural resources and wildlife was an afterthought,” EarthShare, an American NGO, notes. “We need clean energy to combat climate change, but we need to develop it in a responsible manner,” it adds.