Should rich nations pay poor ones to protect tropical forests? 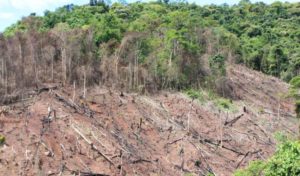 One of the facts of conservation is that the more prosperous a society is, the more likely it is to protect its natural environment. Conversely, less developed nations are prone to exploit and destroy theirs in their drive for more prosperity. The problem, of course, is that much, if not most, of the world’s most biodiverse forests are in developing nations which can often ill afford to protect them against deforestation by loggers, farmers and land developers.

What to do? One solution, proposed by a professor of environmental economics at the University of Oslo in Norway, is this: Let rich nations pay poorer ones for protecting their forests. By doing so, rich nations can ensure that poorer countries will develop sustainably, which is in the interest of everyone, rich or poor, around the planet because that will help reduce our collective carbon footprints.

The scheme introduces the concept of “conservation goods,” whereby rich nations effectively function as “buyers” who purchase forests from poorer nation “sellers.” However, unlike in traditional buyer-seller arrangements, these buyers will not consume “the goods” (i.e. forests) but buy them so as to stop the sellers from consuming them themselves.

It would be a win-win for rich and poor nations alike because we would all benefit far more from preserving those forests than from clearing them, the researcher, Bard Harstad, believes.

Deforestation in countries like Brazil, Indonesia and Myanmar with their large swathes of tropical forests leads both to the loss of biodiversity with unique ecosystems and to climate change through diminishing natural “carbon sinks” (trees and other vegetation, that is). The idea relies on the environmentalist concept of “global commons,” whereby rich and irreplaceable natural resources are treated as the collective property, as well as the collective responsibility, of people around the planet, not just of their host nations.

Yet ironically rich nations currently often fail to help poor nations financially in the latter’s conservation efforts until their unique natural resources, like rainforests, come to be at visible risk. “We’ve reached stalemate,” Harstad said. “This fundamental contradiction means the market for conservation is not efficient and that a forest must be logged gradually to secure the funding needed to protect it.”

Yet even if the scheme is implemented on a large enough scale, there could be some hurdles along the way. Many of the developing nations that boast most of the world’s tropical forest cover also have some of the highest rates of corruption. Coupled with a culture of official impunity and weak law enforcement, endemic corruption could undermine money-for-forest-conservation efforts. To avoid that from happening, rigorous oversight will be needed. Rich nations must also follow through with payments in a timely manner to gain trust from poorer nations.

Governments in some countries might also view this type of quid pro quo as an interference into their countries’ internal affairs. In the wake of devastating forest fires, which were likely set deliberately, in the Amazon region of Brazil, the country’s president, Jair Bolsonaro, has lashed out at foreign conservationists over their criticisms of his government’s handling of the crisis. He’s even accused foreign NGOs of starting the fires themselves so as to make him look bad. At the same time he’s downplayed the extent of the fires and refused any responsibility for them, although some opposition politicians in the country have laid the blame squarely on Bolsonaro.

As a result, in August Norway, which has already paid Brazil some $1.2 billion over the past decade for protecting the Amazon’s forests, suspended its expected payment of $33 million to Brazil’s Amazon Fund, arguing that Brazil’s government broke the terms of the deal. In tandem, Germany likewise refused to sign off on another $39 million in a similar payment.

Bolsonaro, who sees the exploitation of the Amazon’s resources as a way to riches for Brazil, was unfazed. “Isn’t Norway that country that kills whales up there in the north pole?” the Brazilian president noted sarcastically. “Take that money and help Angela Merkel reforest Germany,” he added.

Despite squabbles like this the world’s remaining forests will clearly need to be protected from further degradation, especially in tropical countries where conservation efforts tend to be ad hoc and inefficient. More than 30% of the planet is still forested, yet an estimated 8.7 million acres of forests is lost each year to clearing, logging, fires and other forms of degradation, or the equivalent of 27 football fields every minute, according to the World Wildlife Fund for Nature (WWF).

“Deforestation is a particular concern in tropical rain forests because these forests are home to much of the world’s biodiversity. For example, in the Amazon around 17% of the forest has been lost in the last 50 years, mostly due to forest conversion for cattle ranching,” WWF explains. “Deforestation in this region is particularly rampant near more populated areas, roads and rivers, but even remote areas have been encroached upon when valuable mahogany, gold, and oil are discovered.”

Almost a fourth of the planet’s human inhabitants, or around 1.6 billion people, rely on forests in one way or another. So do most land animals. “Eighty percent of the world’s land-based species, such as elephants and rhinos, live in forests,” WWF says. “Forests also play a critical role in mitigating climate change because they act as a carbon sink — soaking up carbon dioxide that would otherwise be free in the atmosphere and contribute to ongoing changes in climate patterns.”

To save those forests, rich nations should indeed consider paying poorer nations in the so-called global South regularly in order to keep those forests intact. International mechanisms with binding treaties should be put in place to ensure that payments are duly made and forests are duly protected from clearing. There will be setbacks, yes, as the case of Brazil indicates, but solutions can always be found.

“For conservation to work, it is not important that the payment happens today, but the commitment to future compensation must be established already now,” Harstad stressed.