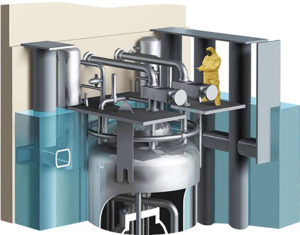 At the UN Climate Action Summit 2019, which just concluded in New York, speaker after speaker called for drastic reduction in global CO2-emissions so as to ward off the worst effects of climate change in coming decades. Yet while low-carbon energy sources in the form of renewables have been gaining ground, large-scale decarbonization efforts have still been waning.

For those efforts to succeed, many experts say, we will need a far larger share of nuclear power as a complement to wind and solar capacity.

“Today only 25% of electricity is low-carbon so we need as much nuclear as possible,” argues Dominique Manière, president of Ontario Power Generation, an electricity company in Canada. “First, existing nuclear plants will need to expand their operations [when] that is safe to do so,” he adds. “But we also believe the best investments to make are in nuclear; there is no doubt about that. We want to develop new nuclear, and to be clear, we have to stay on board with nuclear in the Western world today.”

Yet Manière acknowledges that increasing capacity for nuclear energy is often easier said than done. “We don’t have a success story on new nuclear,” he says. “We have had a lot of difficulties such as cost overruns and not meeting deadlines. We can see that about a lot of projects today. And this is the case not only with large nuclear projects in the West but with all the large projects in the world.”

A new report confirms that view. Nuclear new build has been decreasing in recent years with 46 units currently under construction, as opposed to 68 reactors in 2013 and as many as 234 in 1979. “The number of annual construction starts have fallen from 15 in the pre-Fukushima year (2010) to five in 2018 and, so far, one in 2019,” the report notes. “The historic peak was in 1976 with 44 construction starts, more than the total in the past seven years.”

Nuclear power is clearly losing ground. The main reason for that lies in high costs and prolonged construction timeframes. Yet energy experts are warning that the sharp decline in nuclear energy capacity could well undermine global emission reduction goals and threaten the security of power supplies in advanced economies. As a result, they are advocating both for extending the lifespan of current reactors and for investing in far more new build.

Currently nuclear accounts for a tenth of global electricity generation as the world’s second-largest source of low-carbon electricity, behind hydropower. However, plants across the United States and Europe are ageing fast. They are over 35 years old on average, which means that many of the 452 current reactors around the planet might well be shuttered in coming years.

“Without policy changes, advanced economies could lose 25 percent of their nuclear capacity by 2025 and as much as two-thirds of it by 2040,” the International Energy Agency observes.

Because of their relative affordability, much of the lost capacity could well be replaced not by renewables but highly polluting and carbon-intense gas and coal. Nuclear power would be a good solution, especially in regions where renewables are not as viable. Yet there is no denying that the construction of large new reactors is an often complicated, time-consuming and costly matter. That is why energy experts like Manière see a brighter future for small modular reactors (SMRs), which are considerably cheaper and far more versatile than larger, traditional reactors.

“I think we need to find not an alternative but a complementary solution, and this could be SMRs,” he argues. “Why SMRs? Because they would be simpler projects. There are a lot of things that can be done at manufacturing facilities, which [speeds up construction] because most of the difficulties we have with large projects is the action on site,” he explains. “So if as much as possible is done at manufacturing facilities, that will be a clear benefit” in saving costs and reducing construction times.

New innovations and advancements in smaller-scale nuclear technology could help bring costs down even further, making nuclear energy more affordable. As an added bonus, SMRs can also be made even safer. Some experts go so far as to predict a new nuclear renaissance, thanks to SMRs. Several countries, primarily Russia, China, the United States and Canada, are investing heavily in SMRs.

In a world-first, Russia has recently launched a floating nuclear power plant called the Akademik Lomonosov, demonstrating the versatility of SMRs in various geographical and climatic settings. Constructed in St. Petersburg, the plant has been towed to the Arctic Circle where it is due to start operating soon to provide heat and electricity to a community of 5,000 people in Russia’s northernmost town, the port of Pevek in the Chukotka Region on the East Siberian Sea.

“SMRs require less investment because they are smaller and we have a faster return on investment. So for the financial community they are more attractive than large projects,” Manière explains.

“The two main criticisms of nuclear are safety and accident protection, as well as waste disposal. Some technologies are now handling the first point and some are trying to address the second one,” the expert says. “With these new technologies, even in an event like Fukushima you will never have a core melting in some SMR designs. So it is not just about building new nuclear reactors. It is also about building new types of nuclear.”