Is it time we turned our backs on dairy products? 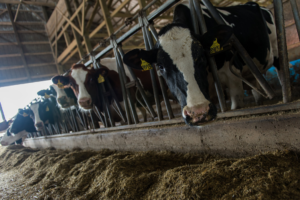 Our love of milk and beef has come at a great cost, and that cost has been both to the welfare of cattle and to the health of the planet. There are some 1.5 billion cows on earth and most of them are kept in pitiful conditions at industrial-scale farms from Brazil to Australia.

Meanwhile, each cow produces between 70 and 120 kilograms of methane in the form of belches and flatulence, thereby greatly exacerbating the amount of greenhouses gases in the atmosphere. When put together, the billions of ruminants around the globe emit the equivalent of 2 billion metric tons of CO2 each year.

A hundred kilograms of methane translates into 2,300kg of CO2 because methane is about 30 times more efficient at trapping the radiative heat of sunrays than carbon dioxide over time. Unit per unit, methane is far more harmful to the environment than CO2.

And that’s not all. The raising of cattle requires plenty of grazing ground and much of that land has come at the expense of forests that have been felled to make way for pastures. Beef production requires 28 times more land than the production of pork and chicken. It also requires 11 times more water and produces five times more climate-warming emissions.

“When compared to staples like potatoes, wheat, and rice, the impact of beef per calorie is even more extreme, requiring 160 times more land and producing 11 times more greenhouse gases,” The Guardian explains, citing a study published in the journal Proceedings of the Natural Academy of Science.

“Agriculture is a significant driver of global warming and causes 15% of all emissions, half of which are from livestock,” the newspaper adds. “Furthermore, the huge amounts of grain and water needed to raise cattle is a concern to experts worried about feeding an extra 2 billion people by 2050.”

By giving up beef altogether, experts note, we could each have as great an impact on the climate as turning your backs on a car that runs on gasoline. By choosing not to consume dairy products, we would also help long-suffering cattle by saving them from often short and brutish lives during which they reduced to being nothing but living-and-breathing sources of milk and meat, animals lovers argue.

“In order to produce commercial quantities of milk, dairy cows are forced to endure a constant cycle of pregnancy and birth,” explains Animal Aid, a British animal rights group. “Lactation does not occur unless this cycle is perpetuated. Calves are usually removed from their mothers within 24 hours of birth, after suckling their mother’s first antibody-rich milk, known as colostrum,” it adds.

“Separation of mother and infant causes acute anxiety and suffering for both animals. Mother cows have been known to break out of fields and then walk for miles to be reunited with calves taken to auction,” Animal Aid says. “Many females replace their worn-out mothers in the dairy herd. But the males are often regarded as waste by-products. Some are reared on veal farms for a few months before being slaughtered; others are killed within a week or two for baby food, or for cheese and pie ingredients.”

In the UK alone tens of thousands of calves are slaughtered each year so that farmers can sell their mothers’ milk.

The post Is it time we turned our backs on dairy products? appeared first on Sustainability Times.