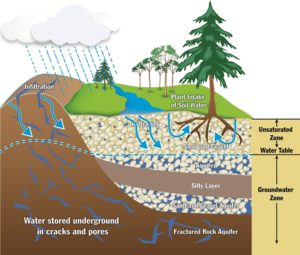 Groundwater accounts for the largest source of freshwater on the planet. So far it has largely been unaffected by climate change, but that may change in coming decades, a team of researchers has found.

Groundwater systems are expected to take a lot longer to respond to climate change than surface water, which means in many parts of the world marked changes brought on groundwater flows by climate change could take as long as a century.

So no worries then, at least in the foreseeable future?

Not so, says another team of scientists. Groundwater is the largest sources of water in agriculture and their results show that nearly a fifth of the catchments areas where groundwater is pumped for irrigation suffer from such low flows in streams and rivers that their freshwater ecosystems are feeling the brunt.

“Already, unsustainable groundwater pumping exceeds recharge from precipitation and rivers, leading to substantial drops in the levels of groundwater and losses of groundwater from its storage, especially in intensively irrigated regions,” the scientists write in a new study published in the journal Nature.

The study looked at groundwater sources and rivers as interlinked systems globally with the aim of show the effects of global groundwater extraction on surface water levels.

“When groundwater levels drop, discharges from groundwater to streams decline, reverse in direction or even stop completely, thereby decreasing streamflow, with potentially devastating effects on aquatic ecosystems,” the scientists explain.

And there is worse news: by the middle of the century half of groundwater sources will likely be affected.

“The effects can be seen already in the Midwest of the United States and in the Indus Valley project between Afghanistan and Pakistan,” notes Inge de Graaf, a hydrologist at the Institute of Earth and Environmental Sciences at the University of Freiburg who led the study.

“If we continue to pump as much groundwater in the coming decades as we have done so far, a critical point will be reached also for regions in southern and central Europe — such as Portugal, Spain and Italy — as well as in North African countries,” de Graaf warns.

By her estimates anywhere between 42% and 79% of regions where groundwater is extracted will have reached their limits by 2050. “Climate change may even accelerate this process, as we expect less precipitation, which will further increase the extraction of groundwater and cause dry areas to dry out completely,” de Graaf adds.

Over the past half century, rising temperatures and ballooning human populations have seen demand for groundwater increase at an accelerating rate globally. Many groundwater sources are depleted faster than they can replenish themselves via rainwater. The scientists say they have found it alarming how sensitive freshwater ecosystems are to even relatively small falls in groundwater levels.

And things may well get worse in coming decades as climate change accelerates and our dependence on groundwater sources grows.