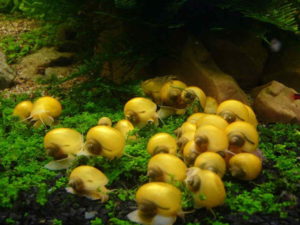 Going simply by their name, golden apple snails may sound like harmless creatures. Cute even. Yet these snails, which are native to South America, have spread far and wide outside their original homeland. And that isn’t necessarily a good thing.

“There was only a few of them last year and the fields were not destroyed. But this year the snails are all over the fields. I am amazed,” says U Than Sein, an administrator in a village in Myanmar (formerly Burma). The devastation caused by the invasive snails has been so bad he was forced to seek help from the country’s Agriculture Department.

And this farmer is hardly alone in bearing the brunt of a snail invasion. The snails possess traits that enable them to thrive in numerous countries in Southeast Asia, including Thailand, Malaysia, the Philippines and Myanmar. The snails can reproduce very fast as one golden apple snail can lay up to 3,000 eggs in water during the rainy season.

When the swamps they prefer run dry, these aquatic creatures escape by migrating deeper into the earth. And when the rains come again, they take advantage of flowing water to spread in great numbers farther afield. In a short period of time they can come to thrive over a large area.

The snails are especially harmful to rice production as they feed on rice shoots. They can severe rice stems by chewing through them. In areas infested by the snails, rice in entire paddies can be devastated overnight.

“They told me that paddy dikes should be built properly after water is pumped out, to avoid flooding the fields and to control snail invasion. They gave me a pesticide that can kill snails even when paddy fields have water. We tested it, and it worked,” U Than Sein said.

Some farmers have resorted to using chemicals to kill the mollusks. Yet that option is not available to farmers who want to grow rice organically. Instead, they rely on biological controls to reduce the populations of the snails.

Enter ducks. The birds can come to the aid of beleaguered farmers.

The barnyard fowls feed on grains, insects and snails like golden apple snails so they are ideal for controlling snail populations. Farmers release ducks into newly tended rice paddies to feed on small, newly hatched snails. Once rice shoots reach about a foot in height, the ducks are released into the paddies again. This time the paddies are flooded in order to let the ducks float on the water’s surface so they can swim between stalks of rice, which stops them from trampling all over the plants.

Studies have found that so-called rice-duck farming significantly reduces the number of the snails and does so in an environmentally friendly manner. Researchers in Malaysia who investigated the ability of various ducks to control invasive snails noted that “[t]he ducks were equally good in consuming snails either in high or in low pest population densities.”

Better yet, ducks in rice farming are beneficial to farmers in more ways than just by eliminating golden apple snails. The birds feast on other enemies of rice plants like insects and weeds. They also provide food to plants through their manure.