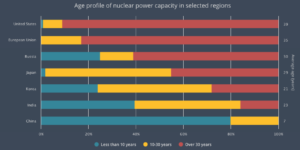 The United Nations Framework Convention on Climate Change (UNFCCC) will take place in Santiago de Chile in December with the aim of working out concrete steps to mitigate the effects of climate change and search for ways to achieve climate neutrality in developed countries. Ahead of the summit, the European Union is working on decoupling its economic growth from their emissions.

Between 1990 and 2017 “the EU’s economy grew by 58%, while total GHG emissions decreased by 22%,” the European Council says. “The EU and its member states are therefore set to overachieve the goal of a 20% GHG [greenhouse gas] reduction domestically by 2020 with existing policies under the EU 2020 climate and energy package.”

Despite this progress, however, the EU’s plan to achieve climate neutrality in its emissions by 2050 may look overly ambitious, judging by conflicting energy policies on the continent. Take Germany. The country’s government has pledged to shutter its coal-fired plants, which provide much of domestically generated electricity, within two decades. Simultaneously, however, Chancellor Angela Merkel has also promised to shut down the country’s nuclear power plants by 2022 in a bid to allay lingering concerns about nuclear energy.

Many experts question whether Germany, the world’s fourth-largest economy, will be able to meet its energy needs with renewables alone since wind, hydropower and solar still account for less than a third of domestic electricity. Meanwhile, contrary to Germany, its neighbor France remains bullish about the prospects of nuclear energy. France derives 75% of its electricity from its 58 current nuclear reactors and the country’s government has asked the French power utility company EDF to construct six new EPR nuclear reactors on three separate sites over the next 15 years. Policymakers in France argue that nuclear power should play an important role in achieving the EU’s climate goals.

Yet there is trouble on the horizon. Many of Europe’s nuclear power plants, including those in France, are reaching the end of sanctioned operational lifetimes. In a new report entitled ” Nuclear Power in a Clean Energy System”, the International Energy Agency (IEA) warns that the decommissioning of ageing nuclear power plants could cause disruptions in energy systems across the continent.

“Nuclear power is the second-largest source of low-carbon electricity today, with 452 operating reactors providing 2700 TWh of electricity in 2018, or 10% of global electricity supply,” notes Brent Wanner, an energy analyst who co-wrote the IEA report.

“In advanced economies, nuclear has long been the largest source of low-carbon electricity, providing 18% of supply in 2018,” Wanner adds. “Yet nuclear is quickly losing ground. While 11.2 GW of new nuclear capacity was connected to power grids globally in 2018 – the highest total since 1990 – these additions were concentrated in China and Russia.”

The phasing out of nuclear power in advanced economies is also bound to increase global CO2 emissions considerably. “In the absence of further lifetime extensions and new projects an additional 4 billion tonnes of CO2 emissions [could result], underlining the importance of the nuclear fleet to low-carbon energy transitions around the globe. In emerging and developing economies, particularly China, the nuclear fleet will provide low-carbon electricity for decades to come,” Wanner says.

And it isn’t just mounting carbon emissions that is at stake if Europe’s older nuclear power plants are shut down in coming years. The continent’s energy mix will also be less diverse as a result, likely causing domestic energy prices in some countries to grow considerably. A solution lies in extending the lives of existing plants. “It is considerably cheaper to extend the life of a reactor than build a new plant, and costs of extensions are competitive with other clean energy options, including new solar PV and wind projects,” Wanner observes.

Another solution is to invest in nuclear new build, in tandem with boosting renewables capacity, especially wind and solar. That is the route China, Russia and other countries have been taking. In Europe too, especially farther east, several countries such as Hungary and Bulgaria, both of which are adding a second nuclear power plant with Russian help to an existing plant, are banking on nuclear energy.

“In Eastern Europe, the Visegrad Group holds a very positive opinion of nuclear energy. Finland is also a pro-nuclear country. Sweden tends to follow the direction of the pro-nuclear countries but is quite shy about it,” says Yves Desbazeille, director general of Foratom, a Brussels-based trade association for the nuclear energy industry in Europe.

“All in all [however], the balance of power in the European Union is shifting against nuclear energy. The situation is not as good as it used to be,” Desbazeille , noted in an interview. “The big question is whether Germany will become an even more antinuclear country.”

The shift is what worries policy experts at the IEA, because nuclear and renewables are not contradictory – but complementary elements in a clean energy system for the future.