You can save Mexican bats by buying certified tequila 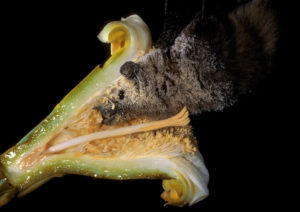 If you love both tequila and wildlife, you might want to check the bottle of the liquor to see whether it has a “bat-friendly” label on it. By buying bat-friendly tequila you can save the flying mammals.

Tequila is produced in Mexico where the distilled beverage is made from the blue weber agave, which is native to the country. Farmers harvest agave plants just before they bloom, cutting all the leaves off and taking only their pineapple-like trunks. The core of the plant contains a sweet substance that can be fermented into an alcoholic beverage.

Instead of using seeds to grow agave plants, however, many farmers increase their crop yields through growing young plants cloned from their mother plants. The practice might provide some advantages to farmers, yet after many generations it has generated a rapid loss of genetic diversity because the DNA of cultivated plants is essentially the same.

The lack of genetic variation has led the plants to be vulnerable to diseases. As both seeds and flowers from agave plants have been taken out of plants’ lifecycle, pollinators depending on agave nectar have also ended up worse-off.

These pollinators include the lesser long-nosed bat and the Mexican long-nosed bat, which feed on agave nectar as the main staple of their diet. A lack of flowers on succulent plants has consequently deprived them of vital food sources.

Last year the lesser long-nosed bat was removed from the U.S.’s endangered-species list because of cooperative and intensive conservation efforts in Mexico and the United States. Yet the Mexican long-nosed bat is still listed as an endangered-species. To boost the population of these bats, farmers are supported to produce bat-friendly tequila. Agave growers let some of their agave grow until they bloom. In doing so, the plants can provide succulent nectar to the bats.

Carlos Camarena, a distiller in the highlands of Jalisco, sets aside 2% of his plants for the sake of the bats. “Well-respected biologists have assured us that we were already over the cliff,” Camarena says. “They said that after 100 years of the bats not visiting the agave, they would not come. And if they were to return, the plants have been dormant for too long to produce seeds; they wouldn’t grow. We decided to try it anyway.”

Tequila producers who cooperate in conservation efforts are given “bat-friendly” labels to certify their products. “We can fully celebrate [the delisting of The lesser long-nosed bat ] as a conservation win,” says Winifred Frick, chief scientist for Bat Conservation International. “But we also need to be paying attention to species that aren’t in as good a position” he adds

The post You can save Mexican bats by buying certified tequila appeared first on Sustainability Times.