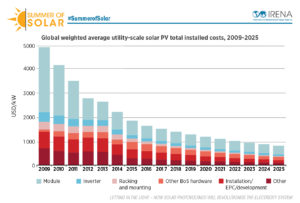 Ask billionaire investor Bill Gates, and he’ll tell you that nuclear energy ought to play a far larger role in future energy plans as part of global efforts to mitigate the worst effects of climate change. “Nuclear is ideal for dealing with climate change, because it is the only carbon-free, scalable energy source that’s available 24 hours a day,” Gates recently observed.

The planet’s current fleet of more than 450 nuclear reactors provide around a third of low-carbon electricity. By and large, however, the prospects of nuclear energy remain in doubt across much of the developed world for a simple reason: cost. Because of the complex technology and rigorous safety requirements involved, new atomic reactors and power plants cost billions of dollars. They can also take years and even decades to be constructed and approved.

“There is considerable potential as well as uncertainty for nuclear power,” Hoesung Lee, chair of the United Nations’ Intergovernmental Panel on Climate Change, says. “The challenge for nuclear power is to be a cost-effective alternative to other non-fossil technologies and to deploy nuclear power much faster than in the past,” Lee adds.

As a result, many advocates of low-carbon energy sources are pinning their hopes on renewables, especially solar and wind. Yet whereas renewables are far cheaper to deploy than nuclear, they can drive up electricity prices for consumers.

In the United States, for example, the national average in the price of electricity is 10.58 cents per kilowatt-hour. In California, a state heavily invested in renewables, it is 16.7 cents per kWh, according to the Global Energy Institute.

Although the costs of renewables have been falling, renewables are generally ill-suited to provide baseload power — the minimum amount of electricity needed to be supplied to an electrical grid at all times — because they are intermittent, weather-dependent power sources. That shortcoming is often remedied by the use of plants powered by the burning of fossil fuels to provide baseload power for grids even when renewables are a large part of electricity generation.

Experts argue that in order for large-scale decarbonization to succeed, nuclear power could and should fulfill that role instead because it is a reliable, abundant and constant sources of energy.

“We can now build wind power for €25 per megawatt hour, yet even offshore I’ve seen some examples of [far higher] offshore wind prices per megawatt hour,” observes Magnus Hall, president and CEO of the Swedish energy company Vattenfall. “I can tell you we are now building offshore wind at €40 per megawatt. That’s really coming down in terms of cost, but it doesn’t really help because you need something at the base.”

“And the thing is that you have to look at how the system works because otherwise you won’t get to make ends meet,” the Swedish energy expert says. “That’s what customers want at the end where you need electricity staying stable 24/7. You cannot compromise with that. There is no consumer who will accept anything else but total stability in terms of electricity production.”

Nuclear energy, Hall points out, is highly efficient for that purpose whereas renewables are far less so. Yet installing nuclear newbuild can be a formidable undertaking. “The main issue [with] nuclear is cost, which is mostly because of regulations that differ from country to country and are often changed as a project is underway, adding unnecessary costs to NPP (nuclear power plant) construction,” Hall explains.

Overly rigorous regulations, which can be changed by regulators at a moment’s notice, can drive up costs significantly and delay the deployment of NPPs by years. This has made building a new power plant seems “the same as building (the passenger airliner) Airbus A380 anew with new safety instructions and new ideas every single time. That cannot be done,” Hall says. “If you look at safety issues, you all fly. Yet is safety in flying any different than safety at a nuclear power plant? No way.”

The solution, Hall argues, lies in streamlining and harmonizing nuclear safety regulations so as to make them more predictable to suppliers and constructors. “[If we do that] they are not going to get surprised every time they are building a new reactor,” he says. “I’m sure we can work with regulators on that issue because we all believe that the [nuclear] industry must be part of the future of energy.”

In addition to bringing down the costs of nuclear newbuild, prolonging the lifetime of ageing reactors and plants will also be key. That way nuclear power can gain a new lease on life in an increasingly decarbonized energy industry, Hall argues.

Nor will nuclear energy projects need to be massive undertakings. The advent of small modular reactors (SMRs), which can be preassembled in factories and deployed far more flexibly to complement renewables in grids, has opened up whole new avenues for nuclear energy on smaller scales.