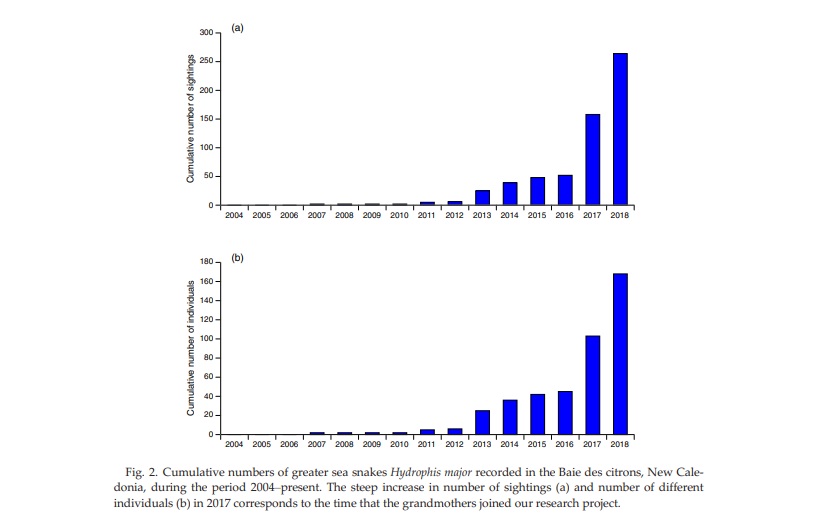 One of the most intriguing citizen-science stories of late comes from the islands of New Caledonia, where surprising research results on venomous sea snakes in offshore waters depended on a group of local grandmothers.

The women, all in their 60s or 70s, are snorkelers who know the waters off the capital city of Noumea, home to about 100,000 people in the overseas French territory located in the western Pacific Ocean.

Their project started when the women offered to help a pair of scientists – Dr. Claire Goiran from the University of New Caledonia and Professor Rick Shine from Australia’s Macquarie University – by photographing the snakes as they encountered them underwater.

Shine and Goiran knew about the snakes because they had been studying a different species in an area of Noumea’s bays for 15 years, the turtle‐headed sea snake or Emydocephalus annulatus.  They would occasionally see the venomous greater seas snake, or Hydrophis major, but despite their best efforts saw only about 10 per year once they began formally observing this second snake too.

The grandmothers, though, spent many a happy hour in the Baie des Citrons, a popular recreation spot in the tourism-driven city. Sylvie, Marilyn, both Moniques and the other friends were ideally suited to the task of seeing beneath the surface in a systematic and safe way.

“In June 2017, these expert swimmers and snorkelers offered to begin photographing the posterior bodies of any greater sea snakes that they encountered during their recreational activities,” said the authors, who published their work this week in the journal Ecosphere. That back end of the snake has its distinctive markings, while making it unnecessary to get much closer to the other end.

“The snakes tolerate close approach by divers without any defensive responses, rendering the procedure safe,” the researchers added. “None of the volunteers attempt to touch or capture snakes; they simply take photographs.”

Goiran said the results, showing far more of the venomous snakes than previously thought, were astonishing. “As soon as the grandmothers set to work, we realized that we had massively underestimated the abundance of greater sea snakes in the bay,” she added.

The new information is helping the scientists to better understand the ecosystem, but also to assess the risks posed by the snake. Shine notes that on the one hand, they now know there is a large number of lethally toxic sea snakes in a small bay crowded by locals, tourists and cruise-ship passengers. On the other hand, there has never been a recorded greater sea-snake bite because the snakes aren’t aggressive to humans.

Beyond the data, the project demonstrates the importance of the knowledge held by the people who live in locales under study, and the power of citizen science projects in assisting scientists.

“I have been studying sea snakes in the Baie des Citrons for 20 years, and thought I understood them very well – but the Fantastic Grandmothers have shown me just how wrong I was,” Goiran said, using the nickname the ladies call themselves.

“The incredible energy of the Grandmothers, and their intimate familiarity with ‘my’ study area, have transformed our understanding of the abundance and ecology of marine snakes in this system. It’s a great pleasure and privilege to work with them.”