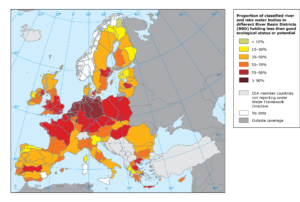 Europe is often portrayed in tourist brochures as a land of bucolic landscapes where burbling brooks wind their ways around undulating hills teeming with wildlife and majestic rivers like the Danube, Seine and Thames flow by quaint medieval towns.

If only such bucolic idyll were truly the case.

To be sure, the picturesque medieval towns are there. And so are the brooks and rivers. The trouble, though, is that most of these waterways are so badly polluted that they fail to meet minimum ecological standards, set by the European Union, for habitat degradation and pollution.

That’s according to a recent report by the European Environment Agency, which states that albeit groundwater sources are generally free of extensive pollution across the continent, the same can hardly be said of surface water bodies.

Only 40% of the rivers, lakes and coastal waters that have been surveyed within the EU are in a good enough state ecologically. Even fewer of them, 30%, “are in good chemical status.” That is to say, almost two-thirds of water bodies surveyed fail to have a healthy ecological status.

Many of the polluted water bodies are in Central Europe in countries such as Germany, the Czech Republic and Hungary, where more than 90% of water bodies fail to meet EU standards.

Another outlier is the United Kingdom, where intensive agricultural cultural practices, including the larges-scale use of fertilizers and pesticides, have worsened water conditions.

Encouragingly, however, many European nations have been making progress in improving water quality and reducing pressure on hydromorphology. “Some of the measures have had an immediate effect; others will result in improvements in the longer term,” the report explains.

Many rivers are much cleaner than they were 25 years ago, yet many waterbodies are still affected by pollutants or have altered habitats. “In 2009, only 43% showed a good/high ecological status; the expected 10 percentage point increase for 2015 (to 53%) constitutes only a modest improvement in aquatic ecosystem health,” the European Environment Agency explains.

“Water management should improve with the second round of river basin management plans covering the 2016-2021 period resulting in the realisation of more policy objectives through stringent, well-integrated implementation and public participation,” it adds.

Karmenu Vella, a Maltese politician in charge of the EU’s  Environment, Maritime Affairs and Fisheries, stresses that European nations must continue to clean up their acts when it comes to their waterways.

“[M]much more needs to be done before all lakes, rivers, coastal waters and groundwater bodies are in good status,” Vella says. “Tackling pollution from agriculture, industry and households requires joint efforts from all water users throughout Europe.”

The post Europe needs to clean up its act on its lakes and rivers appeared first on Sustainability Times.