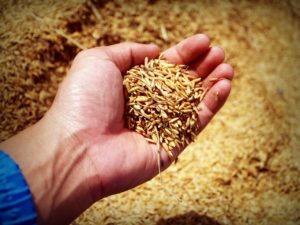 Rice is the world’s largest staple crop, providing food to half the planet’s population. In coming decades, as the numbers of people increase further still, rice will serve an even more critical role in feeding billions.

Yet trouble is on the horizon for rice cultivation, warn researchers from Stanford University. One major cause for concern is climate change that could wreak havoc with the weather in major rice-growing regions, devastating yields.

The researchers’ study, published in the journal Nature Communications, shows that by the end of the century rice yields could plummet by up to 39%. That, they say, would “have devastating consequences in parts of the world that rely on the crop as a basic food source.”

Worse: warming temperatures could trigger changes in the soil of paddies, leading to an increase of arsenic in rice. In fact, rice in future could contain twice as much toxic arsenic as it does today, they argue.

“Our findings indicate that climate-induced changes in soil arsenic behaviour and plant response will lead to currently unforeseen losses in rice grain productivity and quality,” the scientists write.

That is bad news because by 2100 there could be as many as 10 billion people on the planet with half of them depending on rice as the main staple of their diet.

“This is most likely to be a problem where most rice is consumed, so we think about South and East Asia,” observes Tianmei Wang, a PhD candidate in Earth system science who was a coauthor of the study. “Especially for people like my dad. He consumes rice three times a day and he just cannot live without it.”

Rice is cultivated in flooded paddies, which helps arsenic to be loosened from the soil. Today’s rice contains relatively small amounts of arsenic, but in some regions that content is higher and could soon be on the increase.

The scientists found this out by growing rice plants in greenhouses where they controlled the temperature. They found that marked increases in temperatures caused microorganisms in the soil to leach more arsenic already in the soil into the water of paddies under cultivation.

This caused plants to absorb more arsenic. When that happened, arsenic prevented rice plants from absorbing nutrients effectively, thereby stunting their growth. In some scenarios yields decreased by up to 40%.

“Future changes in soil due to higher temperatures combined with flooded conditions cause arsenic to be taken up by rice plants at higher levels — and using irrigation water with naturally occurring high arsenic exacerbates the problem,” Stanford University explains in an article in the findings. “While these factors will not affect all global commodities in the same way, they do extend to other flood-grown crops, like taro and lotus.”

Arsenic is a semi-metallic chemical that occurs naturally in soils and sediments. In smaller amounts it’s harmless yet prolonged exposure to it can lead to a variety of adverse health conditions, including cancer. Infants and children are especially at risk.

“I think this problem is also crucial for people that have young kids in our society,” says E. Marie Muehe, a former postdoctoral scholar at Stanford University who was the study’s lead author. “Because infants are a lot smaller than we are, if they eat rice, that means that they take up more arsenic relative to their body weight.”

To forestall a dramatic drop in rice yields in coming decades, we’ll need to keep global temperature rises in check through lowering our emissions. We can also adopt to a changing climate by breeding hardier varieties of rice, the experts say.