Some birds, it turns out, live in complex societies 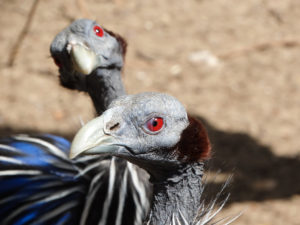 Birds are widely deemed to be, well, bird-brained, but that view could not be farther from the truth. Corvids like ravens and crows are known to be excellent problem solvers and they have been observed fashioning a variety of tools from twigs and other objects at hand. Some scientists have gone so far as to stress these feathered creatures possess human-like intelligence.

Now here comes more evidence that birds are more complex creatures than commonly thought. Scientists from the Max Planck Institute of Animal Behavior and the University of Konstanz in Germany say they have discovered that vulturine guineafowl (Acryllium vulturinum), which inhabit Central Africa, construct multilevel societies. And that despite the birds having relatively small brains.

In a study published in the journal Current Biology, the experts note that members of the species live in “large, multi-male, multi-female groups that associate preferentially with specific other groups, both during the day and at night-time communal roosts.” In addition, the birds, which trace their evolutionary lineage back to the dinosaurs, can keep track of social associations with hundreds of other individuals.

This finding, the experts add, “challenges the notion that large brains are a requirement for complex societies, and providing a clue as to how these societies evolved.”

The researchers decided to track evolving social relationships among the birds in a population of more than 400 adult birds at a site in Kenya for a prolonger period. They realized that this one population of the birds had 18 distinct social groups within it with up to 65 individuals in each group. Moreover, these distinct social groups remained stable even though the birds from each group regularly mingled with members of other groups.

Upon closer observation the scientists discovered that members of groups associated with one another based on their preference rather than through random encounters. In other words, it appears that the birds have “friends” with which they prefer to roost together at night, even if they may spend the day in the company of other birds.

“To our knowledge, this is the first time a social structure like this has been described for birds,” explains Danai Papageorgiou, a PhD student at the Max Planck Institute of Animal Behavior who was the study’s lead author. “It is remarkable to observe hundreds of birds coming out of a roost and splitting up perfectly into completely stable groups every single day. How do they do that? It’s obviously not just about being smart,” Papageorgiou adds.

“Many examples of multilevel societies — primates, elephants and giraffes — might have evolved under similar ecological conditions as vulturine guineafowl,” argues Damien Farine, a principal investigator at the Max Planck Institute of Animal Behavior and the Centre for the Advanced Study of Collective Behaviour at the University of Konstanz.

“Our study does not claim that living in a complex society does not favour having a large brain,” Farine notes. “Rather, it suggests that there may be alternative, simpler ways of achieving the same social outcomes.”

The post Some birds, it turns out, live in complex societies appeared first on Sustainability Times.