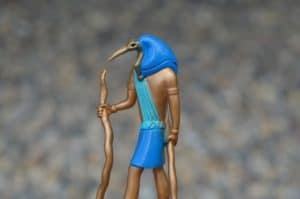 Throughout the history of homo sapiens our species has been highly adept at altering the environment to suit its wants and needs. Creatures large and small have often ended up facing the consequences.

From South America to Australia the first human settlers helped drive megafauna extinct. People hunted several large animals into extinction for their meat, fur and other body parts. Yet we’ve also been taking a toll on wild animals for a physically less pressing need: our religious beliefs.

A case in point: African ibises in Ancient Egypt. The birds were deemed sacred because of their association with the Egyptian god Thoth. Yet that association was hardly to the birds’ actual benefit. Ancient Egyptians mummified countless African sacred ibises so that these birds could be sacrificed to Thoth, the god of magic and wisdom who was depicted with an ibis’s head.

For a new study aimed at finding out how the millions of ibises that ended up in Egyptian tombs were obtained, Sally Wasef of Griffith University in Australia and her colleagues collected DNA from 40 mummified sacred ibises from six Egyptian catacombs dating to around 2,500 years ago. They then compared the genetic results with DNA taken from 26 sacred ibises (Threskiornis aethiopicus) from current populations of the species across Africa.

What the scientists found was that the mummified birds that were studied “show a high level of genetic variation comparable to that identified in modern African populations, contrary to the suggestion in ancient hieroglyphics (or ancient writings) of centralized industrial scale farming of sacrificial birds.”

It has long been believed that migratory wild ibises were domesticated so they could be used as sacrificial objects in regular rituals. Egyptian catacombs are packed with the mummified remains of ibises. Between around 664BC and 250AD, the birds were routinely sacrificed to Thoth and they were also often mummified so that they could be interned in tombs.

“In ancient sites across Egypt, these mummified birds are stacked floor to ceiling along kilometers of catacombs, totaling many millions of birds,” a statement on the study explains. “But how the Egyptians got access to so many birds has been a mystery; some ancient texts indicate that long-term farming and domestication may have been employed.”

The most probable scenario according to their findings, the researchers note, “is that local Sacred Ibis were tended in the natural habitats or small, localised farms. If they were deliberately farmed, it is likely that this would have been for only short time periods (perhaps a single season), before being sacrificed and entombed.”