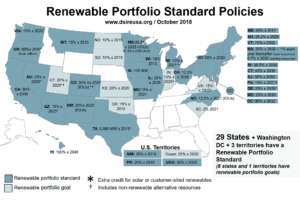 The definition of a solar PV system is an array of solar-collecting panels, often seen on rooftops or mounted on the ground, which capture solar radiation and converts this into usable power. More specifically, solar PV captures solar radiation in direct current (DC) form and changes the nature of the power through an inverter to match alternating current (AC) used on the power grid.

Many incentives serve to lower the cost of solar power and bring the technology into competition with other forms of energy generation.

One such incentive in the U.S. is the solar energy investment tax credit (ITC), which has been a major driver of solar energy uptake across the country since its inception in 2006. Extended two times and reshaped in 2015, the 30% federal ITC is one of the most important federal policy mechanisms to support the deployment of solar energy in the U.S.

Prior to 2000, most installed solar panels were for research and development (R&D) or demonstration projects. These projects were small in scale due to very high costs associated with the technology at the time. However, in the early 2000s, supportive policies came into force in Europe and the U.S., which began to bring costs down.

In Europe, particular countries (such as Germany, Italy, and Spain) opted to drive the adoption of renewable energy sources with feed-in tariffs (FiTs). These payment mechanisms operate like long-term fixed price power purchase agreements (PPAs) and last 10 to 25 years with a price well above market. These agreements have driven significant renewable energy buildout.

Learning from Germany’s expensive FiTs, the U.S. preferred a market-based solution to promote the adoption of renewable technologies. RPS requirements created demand for large solar investments, most predominantly in California and the Southwest U.S., an area rich with potential. Coupled with the 30% ITC and other incentives, this provided means for lowering costs.

However, RPS programs rely on the most cost-effective renewable resource through bidding processes and are not handed out on a first come-first served basis like FiTs in Europe. Competitive auctions, long-term contracting and financing make RPS a more equitable distribution of subsidies based on economic-competitiveness.

Cost is often seen as a major deterrent to wide-scale adoption of solar, yet it has now become a tailwind for solar PV under certain circumstances. Two technologies, crystalline silicon and thin film PV, account for the vast majority of the global solar market today. Due in large part to on-going subsidies, technology improvements, falling costs, favorable borrowing rates, and economies of scale, many utility-scale (2+ MW) solar PV projects have become cost competitive with alternatives.

In fact, total installed costs have fallen over 60% in the nine years from 2009 to 2018, with further decreases anticipated. The costs are particularly attractive for utility-scale solar in certain regions of the U.S. with high solar resources. In a 2015 study, the Brattle Group examined the cost disparity between residential solar PV and utility-scale solar PV in Xcel Colorado’s service area.

The results found that the cost of generating 300 MW from utility-scale solar PV is roughly half the cost per MWh of the equivalent output from 60,000, five kW residential-scale systems. (For reference, 1 MW = 1,000 kW.) The Brattle study found the primary reasons for the cost disparity are economies of scale and the increased output resulting from the optimized placement and orientation of panels.

Few utility companies own solar projects directly and often take power through power purchase agreements with third parties. This occurs primarily because of the tax normalization policy utilities must abide by under the Internal Revenue Code.

What are some cost challenges for utilities to own solar power?

One hindrance has been the cost-effectiveness of regulated utilities to invest in solar projects which they own and operate. Due to normalization procedures, utilities do not have the ability to offset their tax liability from the year the project is placed in-service.

Normalization is an accounting system provided for by Treasury regulations which require regulated public utilities to reconcile the tax treatment of the ITC. In effect, these tax credits must be recognized over the depreciable life of the asset and not upfront like non-regulated entities enjoy.

Regulated utilities use rates set by a public regulator which accounts for depreciation on utility assets and the tax expense associated with them. Normalization rules in the Internal Revenue Code require the calculation of tax depreciation expense to vary from how utilities file their returns.

For the purposes of the ITC, normalization requires the tax expense to be depreciated over the economic useful life of the asset. In the case of solar, often 30 years. Therefore, the ITC loses its effectiveness on a net present value basis and makes utility-owned solar project less cost-effective than 3rd-party owned solar.

Importantly, the ITC and other incentives have served as major drivers for lowering the cost of solar power in the U.S. Similar incentives can work their charm in other countries as well.