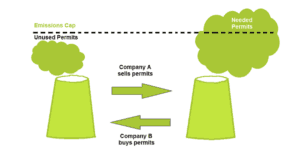 The European Union Emissions Trading System (EU ETS) was conceived with the purpose to decrease the EU’s emissions trajectory in important sectors, including energy production, energy intensive industries and aviation. As a market-based mechanism, this should happen in a cost-effective way, as the market players will cut emissions where it is the cheapest to do so. Approximately 45 % of European emissions fall within the ETS.

The basic premise of a market-based solution is that other national policies regarding emission reductions in these sectors would not be needed. Indeed, any national policy targeting activities in the ETS sector will be both more costly and meaningless from an emissions point of view. The maximum and minimum amount of emissions in the ETS stays the same no matter what other policies are put in place inside the ETS sectors. Those emissions can only be affected by decreasing the amount of emissions credits in the ETS.

Some politicians and analysts have realised what I explained above: for the total ETS sector emissions, it doesn’t really matter what kind of policy we have in place inside the ETS sectors. They subsequently have turned this thinking on its head and are now promoting policies that increase emissions. Worse, they justify these policies precisely on the fact that it doesn’t really matter since the ETS will ensure that overall emissions in Europe won’t increase.

Jos Delbeke, the Director General of climate action in the European Commission, is suggesting just that. According to him, Belgium should shut down its nuclear fleet that is producing low-carbon electricity, and replace it with natural gas, wind and solar. The net effect would be zero, since Belgium’s utilities would have to buy emissions credits from the ETS for the natural gas burning, and the overall amount of those credits would stay the same at the European level.

Other politicians have taken this message to heart and are promoting such actions. But this thinking is counter-productive for the climate on many levels.

As stated above, the ETS was created to obviate the need for these kind of national energy policies. It was created to be an effective, market-based solution, where emissions would be reduced in the most cost-effective way. However, this can only happen if the markets are allowed to use the most cost-effective ways on a level playing field. Reports like this one from the International Energy Agency (IEA) make it clear that long term operation of existing nuclear fleets is the most cost-effective means to increase clean energy production and decrease emissions. Policies that prevent this are effectively undermining the whole idea of an effective, market-based solution.

At the same time, Jos Delbeke’s proposal to use natural gas on the merit that it can be turned on and off depending on wind and solar availability doesn’t withstand scrutiny either. Nuclear reactors can easily adjust their power output too since they are designed to drive production up and down as needed. Natural gas still releases CO2, so why build a lock-in on fossil fuel combustion only to force shutdowns of operable, zero-emission nuclear reactors?

The case for nuclear

Beyond the problematic policies enacted by individual EU member states, the ETS – while a necessary step in the right direction – contains inherent flaws in its current form that need to be corrected if it is hoped to fulfil its potential.

For example, the ETS currently has many more emissions baked in than what is compatible with the reductions needed for the Paris climate accord. The amount of credits available in the ETS needs to be cut drastically, which will increase the cost of these credits. For this reason, it is politically unpopular in Eastern European countries relying heavily on coal in their energy mix, while lacking capital to invest in clean energy such as nuclear. Unfortunately, this situation won’t change soon: various Western European countries are doing their best to limit the available tools poorer countries can use by excluding nuclear from sustainable finance options, thereby increasing financing costs for any nuclear projects.

The answer here is simple: finance aid for nuclear needs to be provided so that states that are willing, but as of yet unable to utilize nuclear, become enabled to do so. Not doing so means that the EU is unnecessarily limiting its tools in its ambition to fight CO2 emissions, keeping ETS credits artificially high. The more expensive climate mitigation becomes through artificial limitations, the more likely it is that the amount of emissions credits in the ETS will never be reduced to the required level.

After all, the idea that nuclear shouldn’t be a part of any climate mitigation strategy has no basis in evidence, public safety or environmental benefits. The coal industry kills more people every day than the nuclear energy sector has during its 60+ years of existence, including accidents like Chernobyl and Fukushima. As far as the environmental footprint is concerned, the environmental footprint of nuclear is very small. A large amount of electricity can be produced from a small area, and even with the footprint of uranium mining, the overall land area is much smaller than other low carbon energy. Hydro, wind, solar and bioenergy take a lot of space because they harvest and dilute energy flows or use large areas for storage in the case of hydro.

Going further, it will become more and more likely that there will be more voices arguing for the ETS and emissions reduction targets to be abandoned altogether as they are hurting the economy. Closing nuclear will only be replaced with more polluting, more dangerous and environmentally more harmful energy sources – or spell the end of the ETS altogether.