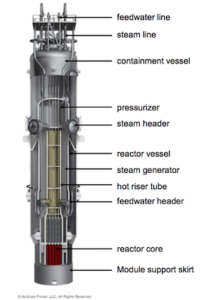 Nuclear energy may have its fair share of detractors, but it has a decisive advantage over classical means of energy production. The fission of a heavy atom like U235 or Pu239 generates an energy of 200 Megaelectronvolts (Mev), whereas a molecule in a chemical burning process, or a hydrogen molecule in electrolytic reactions, yields only a fraction of that energy output. In other words, nuclear has an energy efficiency ratio of about one hundred million.

This basic feature means that NPPs can be built according to very compact designs that minimize the amount of material and land used, even if shielding against radiation is needed. From this arose the idea of small power plant units for special applications – small modular reactors (MSRs) – for example, for an island or a secluded region, and powering desalination plants in regions where it is not possible to have electrical power available from grids or cables.

Placing one of these SMRs on a floating platform at sea in order to provide energy in areas of growing in importance like the Arctic was a logical step las well, one that was recently realized by Russia’s Akademik Lomonosov. The first floating nuclear plant launched in August 2019, it consists of two modular reactors providing 35 MWe each, placed on a floating platform. Akademik Lomonosov recently arrived in Pevek in Russia’s Artic region.

This new field of nuclear applications for energy is not free from the challenges attached to nuclear plants, although it is important to note that the safety of SMRs is a key factor behind the spread of this technology.

At this stage of development – still mainly the design phase – SMRs are capable of producing electrical power between 10 to 300 MWe. Many models are being developed, such as pressurized water reactors, sodium cooled fast breeders, and gas cooled reactors. According to the scope of their applications these little reactors must fulfil some basic characteristics: safety under normal and accident conditions needs to be ensured; the nuclear fuel pins must sustain a high level of burn-up, enabling reactor operation for a long time with minimal maintenance; and sufficient flexibility in its operational abilities to fulfil the needs of heat or electricity production.

Naturally, safety is the main requirement for the viability of these technologies. In this context, one inherent design detail is of major importance. SMRs have exceptionally small nuclear cores – one of the technology’s most compelling by-design safety feature. Given its small size, cooling of the core can be easily ensured by natural convection, and consequently, the continued control of the core temperature is no longer dependent on external factors in an abnormal situation.

The inherent safety design also means that the potential of radioactive aerosol releases in an accident is inherently smaller in SMRs than in conventional NPPs. Owing to this and because SMRs have low rated thermal power levels, the exclusion zone (EZ) around SMRs can be significantly reduced. Whereas standard NPPs have EZs that are on average 5 to 10 km in radius – depending on the country, NPP type and production capacity – SMR EZs can be minimized to a few kilometers, or even to the site boundaries. But as is the case in all nuclear accidents, the same general safety precautions apply, including community emergency measures and off-site responses.

Unloading spent fuel from a nuclear core is always a complex undertaking. To ensure shielding against neutron fluxes, gamma and alpha rays emitted by a spent fuel assembly, complex systems are usually designed where blockages might occur. It is necessary to avoid such problems on a SMR located in a secluded region. The mechanisms dedicated to the fuel assembly’s removal must therefore be simple.

Hence the main problem shifts towards the conception of an efficient shielding because the handling concerns still highly radioactive spent fuel assemblies. Then the spent fuel and the radioactive effluents released during this process have to be safely stored, which could be somewhat more problematic than with conventional reactors.

Nevertheless, solutions exist. In the case of floating SMRs, like the Akademik Lomonosov, the easiest solution is to steer the platform to where nuclear submarines have their fuel unloaded and renewed. For land-based SMRs, there is the possibility to carry the modular reactor in a sealed containment and doing a secure cold shutdown. This solution could be implemented for a transfer carried out at a short distance, so sub surface storage areas for spent fuel and radioactive effluents must be found.

These nuclear power innovations are very recent ones. Among the most promising technologies to produce electricity and heat, only few have reached industrial viability. High temperature thermal graphite gas cooled reactors, molten salt reactors or gas cooled fast breeders, for instance, still need to be further developed before being deployed industrially. Some of these technologies are of high interest for SMRs. Fast breeding reactors can notably enhance fuel burn up rate and flexibility of use, while molten salt reactors offer intriguing safety innovations.

For governments, the nuclear domain is of high strategic significance, since it not only showcases national knowhow in high technology, coding and the development of innovative materials. It also stimulates research in numerous other fields such as robotics and even the medical sciences. The research undertaken regarding SMRs is part of this positive knock-on effect and will enhance the role of nuclear applications in our industrial societies.

As we have seen, in terms of nuclear core safety, cooling under all conditions and control of the fission chain bursts, SMRs prove to be much safer than larger power units currently installed, meaning that this technology is the best answer to energy demands in remote regions – even if challenges related to fuel handling and storage in remote locations must be acknowledged and dealt with.

This naturally means that the industry needs to accompany SMR development with new training courses to create well-trained teams for operating, monitoring and maintenance of SMRs. Considering that SMRs present such advantages for specific applications, this will certainly happen in a near future. If these challenges are mastered, a whole new sector of new nuclear applications will be opened up.