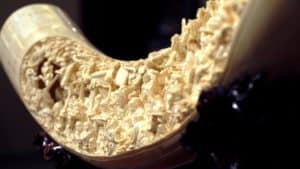 Europeans, or at least some of them, are helping drive African elephants into extinction. How so? Simply by buying products made from ivory.

According to findings by the international conservationist group Avaaz, ivory obtained illegally from African elephants in the wild is being sold across Europe. The NGO said last year that it purchased a total of 109 ivory products sold as “antiques” by dealers in 10 European countries: Belgium, Bulgaria, France, Germany, Ireland, Italy, the Netherlands, Portugal, Spain, and the UK.

The NGO then had all the items radiocarbon-dated at Oxford University to find out about their exact age.

All the pieces of ivory were advertised as having originated before 1947, the cutoff date for what can be classified as antique by EU law, or else they lacked specific information about their dates of origin. Instead, what the researchers found was that nearly 75% of the objects had been obtained from wild elephants after 1989, the year the trade of ivory was banned globally.

In Bulgaria, Italy and Spain every single one of the ivory items bought by Avaaz was illegal under EU law. In France, 85% of the ivory items purchased locally were illegal despite stringent French laws that require proper authentications for the sale of antiques.

“It’s sick,” Bert Wander, Avaaz’s campaign director, told the BBC. “I’m looking at the trinkets we bought on my desk, and to think that an elephant with all the things we are learning about them, about their cognition and their advanced societies, and to think that one of them has died for this bracelet I’m holding now, it makes you sick to your stomach.”

Avaaz has called for a ban on the sale of all ivory products within the EU as well as for an end to all further ivory imports into Europe. “This bombshell evidence proves beyond doubt that illegal ivory is being sold across Europe,” Wander stressed. “It must spark the end of this bloody trade. Every day the sale of these trinkets continues is a day closer to wiping out majestic elephants for ever.”

Despite protection measures, global wildlife smuggling syndicates continue to target herds in Africa with the sale of ivory having reached record highs last year, based on the seizure of large shipments globally. Most of the illicit ivory is destined for China, which has decided to enact a ban on the sale of ivory but has yet to stamp out the thriving illegal trade in animal parts in the country.

“The world is dealing with an unprecedented spike in illegal wildlife trade, threatening to overturn decades of conservation gains,” WWF explains on its website. The number of African elephants has dropped precipitously over the past century, from millions of pachyderms in the early 20th century to around 470,000 today, WWF adds.

Once the animals roamed far and wide across the continent, but by now they have been driven into much-shriveled natural ranges in some of the continent’s savannahs and equatorial rainforests. Around a fifth of elephants live in well-protected areas, but poachers continue to hunt them for their tusks and other body parts, which are highly prized as materials and ingredients for decorations, pieces of jewelry, and remedies in traditional Chinese medicine.