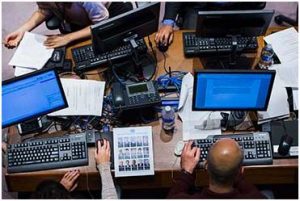 The news-media industry has long lamented how the digital revolution has broken its business models. Today, a majority of digital advertising money goes to Facebook and Google, and media companies are struggling to reinvent themselves through digital subscriptions.

But the disruption hasn’t only affected advertising: it has also fundamentally changed and challenged journalism itself.

Historically, journalism has played a central role in shaping public discourse. News organisations have served as gate¬keepers and chosen what to amplify. They have always been good at catching the audience’s attention and driving engagement. This has, however, also been about ethics and purpose.

But the new public sphere has a different logic from the old. Today, journalism is just one of many actors providing information on what is going on in the world — only one of many providers of content, in an ecosystem which optimises for anger, fear and other strong emotions and where lies travel faster than the truth.

In this new world, journalism needs to change, and journalists need to learn the landscape and avoid the pitfalls. If we don’t, journalism risks becoming a mirror to the anger-driven, social-network logic — instead of a counterweight on the side of truth and reason.

Given these new challenges, here are five lessons for journalism in the age of rage.

Don’t get your news, angles or sources from Twitter

Twitter is, compared with the bigger social-network platforms, a small shop. But in the news ecosystem it is hugely important, and unfortunately often in a destructive way. Politicians and pundits are over-represented on the platform; so are propagandists and manipulators.

Still, many journalists spend a disproportionate amount of time on Twitter, looking for angles and topics. Since the platform is easy to manipulate for anyone with access to money or a network of bots, this makes them easy targets for manipulation.

The architecture of the new public sphere makes life harder for journalists. But it also makes their job more important than before.

Twitter also distorts journalism in more subtle ways. Journalists love engagement. Due to the nature of the platform, the content to which journalists get the strongest reactions on Twitter tends to be variations on the big topic of the day — the stories everyone is already covering.

When journalists spend too much time on Twitter, this can lead to a dumbing down of coverage, in a time when what we need is independent, thoughtful journalism, looking for the untold stories.

Don’t be a useful idiot

The tools of social networks were built to connect people and give them means of expression. It was never the plan, as the American tech journalist and thinker Danah Boyd says, that these ‘tools of amplification would be weaponized to radicalize people towards extremism, gaslight publics, or serve as vehicles of cruel harassment’.

That, however, is what has happened. The hard part for journalists is how to learn to avoid becoming useful idiots, playing into the hands of those using the platforms to amplify their agenda. To do that, journalists need to understand how manipulation works on social networks.

Boyd uses the example of the anti-Muslim pastor Terry Jones, who in 2010 began using social networks to threaten publicly to burn the Qur’an. His goal was to attract the attention of mainstream news media to promote his congregation, which had around 50 members.

A network of bloggers started to write about him, and finally the then US Secretary of State, Hillary Clinton, issued a statement condemning him — which led to massive media coverage. When he finally burned the Qur’an, the event was covered by every news outlet. The incident led to riots in Afghanistan, and the deaths of 12 people.

The question is: was it necessary and important to cover this spectacle? Should the media report on intolerant provocations by marginal figures?

The architecture of the new public sphere makes life harder for journalists. But it also makes their job more important than before.

It’s harder not only because they can’t single-handedly set the agenda but also because the undermining of journalism is a central part of the political programme of many right-wing populist parties currently on the rise.

The attacks on journalism — as ‘fake news’ — by government heads Donald Trump in the US, Rodrigo Duterte in the Philippines and Viktor Orbán in Hungary are not isolated events: they are part of a pattern.

The undermining of the free press is at the centre of the political agenda for authoritarians across the globe. It is a difficult balancing act to be aware that journalism is under attack yet, at the same time, to stay open to justified criticism.

The rise of Big Tech is one of the most important stories of our generation. Facebook has over 2.3 billion monthly users and YouTube last year had 1.8 billion logged on. The majority of Americans get their news from social networks and the same is true of most European countries.

Individually, journalists need to find the strength and the motivation to go on, without retreating or becoming overly defensive.

Never in the history of humankind have companies existed with such reach and impact on information and human communication. These new global superpowers need to be reported on and scrutinised, not only from the ‘tech’ angle.

Some media organisations have come a long way in this regard but many are still lagging irresponsibly far behind. The tech giants’ operations affect democracy, innovation and politics here as well, and the coverage needs to reflect that.

Get used to the hatred

Journalists who learned the trade in the old days are not used to the hatred, criticism, threats and aggression, directed towards them, which flourish on social networks and elsewhere today. Since many of the attacks are politically motivated, it is unrealistic to believe they will simply go away.

Instead, journalism needs to learn how to thrive and stay focused in this new environment. On an organisational level, editors need to deal with the consequent stress and psychological pressure, and media organisations should set up smart and efficient security routines for their employees if they haven’t already done so.

Individually, journalists need to find the strength and the motivation to go on, without retreating or becoming overly defensive. While it may be small consolation, at the end of the day the attacks are testimony to the importance of the work they do.

Good journalism has never been as important as now, and never so hard. Journalism can and will survive. But it needs to learn how to navigate this new environment.

This article is a joint publication by Social Europe and IPS-Journal.

The post Five Lessons for Journalism in the Age of Rage– & Where Lies Travel Faster Than Truth appeared first on Inter Press Service.

Karin Pettersson is director of public policy at Schibsted Media Group and chair of WAN-IFRA Media Freedom Board. She is a 2017 Nieman-Berkman Klein Fellow at Harvard University and former political editor-in-chief at Aftonbladet, Scandinavia’s biggest daily newspaper.

The post Five Lessons for Journalism in the Age of Rage– & Where Lies Travel Faster Than Truth appeared first on Inter Press Service.