Volunteerism – An Antidote to a World in Flux 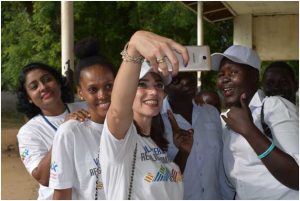 As the world warms, as inequality widens and as an increasing number of societies suffer from instability and conflict, many people are left wondering what they can do about it.

Every day, an estimated one billion volunteers make a difference to the people and communities where they live and work. They create social bonds and give a voice to marginalized and vulnerable groups. They are often the first to act in moments of crisis. They dedicate their time, skills and passion to make the world a better place.

Right now, nearly 8,000 UN Volunteers, from 18 to 81 years old, serve with over 40 UN partners through the UN Volunteers (UNV) programme, which the United Nations Development Programme (UNDP) hosts with great pride — each an ambassador for the importance of volunteerism in development worldwide.

Volunteers help communities to self-organize around their own specific priorities – and support people who are marginalized to tap into mainstream areas of support and public services. That includes UN Volunteers in Asia and the Pacific who have worked at the local level to tackle violence against women and girls.

Mana, who was part of the Partners for Prevention project in Cambodia, noted that many of the participants altered their entrenched attitudes towards gender equality — observing that this, “changed heart and mind can have a long lasting and positive impact on society”.

Or in Pakistan, where the World Health Organization mobilized over 150 UN Volunteers as district monitors to support measles readiness assessment campaigns, targeting 32 million children. As one community member in China put it, volunteers, “…know exactly how to get along with the residents and handle their problems”.

And in the Philippines, Christian and Muslim volunteers organized and implemented interfaith environmental protection activities — as one of the volunteers noted, this, “…was one thing that we could work on together, it was an eye-opener for us”. The solidarity, empathy and connections generated through social action comes to the fore during crises.

During the 2014-16 Ebola outbreak in West Africa, local, national and international volunteers worked together to tend to victims and halt the spread of the disease, despite considerable and cross-border challenges.

Volunteers also strengthen community resilience by integrating refugees and displaced persons, building ownership in the peace and development process and strengthening social cohesion within; and across groups.

In Niger, for example, UN Volunteers working with UNHCR provided much-needed translation and interpretation services to refugees evacuated from Libya — helping to improve the quality of protection and assistance provided to refugees.

New ways of harnessing the power of volunteerism are emerging all the time. Soon after Ecuador experienced a major earthquake in 2016, Zooniverse, a web-based platform for crowdsourced research, utilized 3,000 volunteers and artificial intelligence to review 1,300 satellite images.

Just two hours after the earthquake, a “heat map” of the damage including road blockages was produced to accelerate the disaster response.

The United Nations keenly understands the need to harness the almost limitless power of volunteers bring to accelerate progress towards the Sustainable Development Goals — a universal call to action to end poverty, protect the planet and ensure that all people enjoy peace and prosperity by the year 2030.

On International Volunteer Day*, we recognize the extraordinary contribution of volunteers to this end. In every part of the globe, they are at the forefront of every major shock and stress, responding to problems big and small that benefit all people.

And as one local volunteer in Myanmar summed it up, “this work can’t be measured in financial terms”. Volunteers are also transforming preconceived notions around who is a productive member of society as volunteerism recognizes the inherent value of all people irrespective of age, sex, disability, race, ethnicity, origin, religion or economic or other status.

The remarkable results achieved by volunteers to shape that brighter, more inclusive future show that it is worth trying.

That is why they are a such a powerful antidote to a world in flux.

*International Volunteer Day 2019 is marked on 5 December with the theme “Volunteer for an inclusive future“, highlighting Sustainable Development Goal Number 10 and the pursuit of equality – including inclusion – through volunteerism. Learn more about UN Volunteers opportunities here.

The post Volunteerism – An Antidote to a World in Flux appeared first on Inter Press Service.

The post Volunteerism – An Antidote to a World in Flux appeared first on Inter Press Service.