Thailand’s wild elephants are on the rebound. Not everyone is happy 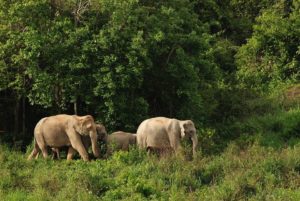 A century ago there were some 100,000 elephants in the Kingdom of Siam, or Thailand as it is known today. These days the country is home to around 3,500-4000 wild elephants, based on estimates, but their number has been on the rise, thanks to concerted conservation efforts.

According to Thailand’s National Parks, Wildlife and Plant Conservation Department (DNP), compared to the last census in 2002, there was a 7% increase in the number of elephants 15 years later, in 2017. “The wild Thai elephant population is no longer at risk of extinction because of intensive care and monitoring,” Soontorn Chayawattana, director of the Wildlife Conservation Office, announced.

This is good news for conservationists. Villagers living near wildlife reserves with elephants might disagree, however. As there are limited water and food resources available for the jumbos in some forests, wild elephants often go beyond the boundaries of protected areas in order to feast on villagers’ crops. The result sometimes involves conflicts between humans and the pachyderms.

With more elephants in the wild, the chances of elephant-human conflicts have increased. Local farmers often resort to methods that have tragic repercussions for elephants. Electric fences have been deployed to stop elephants from wandering into plantations and some of the animals have been killed by electricity. Meanwhile, several villagers have been gored and trampled to death while they were protecting their farms from the giant animals.

“The increase in the number of elephants by 7% is cause for optimism as we expect the population of them in 10 years to increase even further. There could be 670 to 680 more elephants in the wild [in a decade],” said Soontorn. “The data from the latest census provides clearer information and helps us make plans to manage water and food resources better to provide for the more than 600 elephants that will be in the wild in future,” he added.

What of the increased risk of elephant-human conflicts, however? Wildlife officials have been trying to come up with solutions such as encouraging villagers to grow sturdy thickets of bamboo around their property, instead of potentially lethal electric ones, to stop elephants from feasting on crops. Local communities in the vicinity of Khao Yai National Park, in central Thailand, where more than 300 wild pachyderms live, have received support for growing such natural bamboo barriers.

“This can be a life-saver for both humans and elephants,” explained Chongklai Worapongsathorn, the department’s deputy director-general. “With this technique, we are looking at a long-term solution because bamboo fences do not require regular maintenance and are sturdier than their electric counterparts. What could be better than a fence that grows on its own?”

Earlier this year WWF-Thailand cooperated with the wildlife department to launch a project designed for studying the movements and behaviors of wild elephants. Three wild elephants were equipped with GPS satellite collars. Conservationists are now collecting and analyzing the data so as to find ways to reduce conflicts between villagers and pachyderms.

“These collars will be used to study the migratory movements of these elephants so as to resolve the issue of elephants coming in and destroying the agricultural lands,” said Dr. Pinsak Suraswadi, a senior wildlife official explained. “This is not an issue that comes down to whether elephants kill people or people kill elephants — it’s about finding a viable solution where elephants can live in harmony with people in the future.”

However, some experts do not think that such approaches in themselves will suffice. They stress that a solution lies in enriching elephants’ natural habitats so they will be able to find enough food within their forests and so they will be less inclined to raid human settlements.

“Elephants are intelligent. They learn fast how to destroy fabricated barriers,” said Dr. Mattana Sriktrachang, chief of the Wildlife Information Center. “Elephants can also migrate very long distances. We can see that in most proposed solutions we tend to ignore [the needs of] wild elephants,” she added.

“We do not observe elephant behaviors. We only focus on ourselves; what is the easiest and most convenient solution for us,” Mattana noted. “Ultimately, the problems cannot be solved this way. We have to reevaluate whether the approaches that have been taken are really beneficial.”

The post Thailand’s wild elephants are on the rebound. Not everyone is happy appeared first on Sustainability Times.