After COP25, a more inclusive climate policy is needed 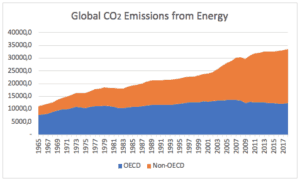 With COP25 in Madrid having turned out to be a dud, the chances that global carbon emissions will see effective cuts any time soon look rather bleak. But if the COP25-failure showed one thing, it is that we are woefully failing to employ the right means to decarbonize our energy system. This is despite the fact that a reliable low-carbon energy source is available to achieve this, namely nuclear power.

There has been a lot of political and economic interest in renewable energy, and it is safe to say that both interests are directly interconnected – with the result that favourable policies have made investing in wind and solar profitable and low risk, while nuclear has been disadvantaged.

Nevertheless, CO2-emissions have been slow to come down. In fact, they have risen for three consecutive years for a record 37 billion metric tons in 2019, and emissions are likely going to rise once more in 2020. At the same time, the limits of adding more variable electricity production is becoming increasingly evident as integration costs of renewables increase in the more mature markets, and there is less willingness for anyone to pay for them. I, among others, have said that we should also have more nuclear power in the system. Here are the reasons why that would be a good idea for the climate – and the challenges that remain.

The IPCC went through all the relevant literature on the subject in their 2014 report and found out nuclear had comparable life-cycle emissions to wind. National Renewable Energy Laboratory NREL did a similar review and came to same conclusion. The emissions of nuclear come from other than direct emissions, like materials, uranium mining, transportation and such. And since nuclear is very efficient in materials use, supplying all that concrete, steel and uranium ends up resulting in a relatively tiny amount of emissions per energy produced.

On the other hand, according to one analysis, a solar plant producing 1,000MW of output would need to cover up to 260 square kilometres and require the use of “35,000 tons of aluminium, two million tons of concrete, 7,500 tons of copper, 600,000 tons of steel, 75,000 tons of glass, and 1,500 tons of other metals such as chromium and titanium” – magnitudes of the material and carbon emissions used to build a NPP of similar output capacity.

It’s not only about electricity

Nuclear reactors generate electricity by first producing hot steam which is then used to drive a turbine generator. Yet there is no reason we could not use that steam for other things as well. The potential is enormous: roughly half of Europe’s (and global) final energy is used as heat, mainly for space heating, hot water or industrial processes.

Nuclear reactors, especially the smaller ones coming to the market in the 2020s, are well suited for providing affordable process steam for industries, or combined heat and power for flexible electricity and district heating for homes and businesses. Compared to electricity, steam is roughly a third of the cost per megawatt hour when supplied from a nuclear reactor.

The lifetime cost of a megawatt hour of electricity from a nuclear reactor is roughly between €30 and €45. That means that steam costs €10 to €20 per MWh. With a fully amortized nuclear power plant, the cost of steam falls to even less than €10 / MWh, which is very competitive with just about anything out there, including coal and gas.

For industry, reliability and cost are key when it comes to energy supply, lest they lose their global competitiveness. As low emissions become more and more important as well, nuclear reactors are a tremendous opportunity and value in industries, helping achieve deep decarbonization and reach our climate goals at the same time.

But in order to deploy nuclear power most effectively, the regulatory framework needs to be adapted and streamlined. Nuclear regulations remain overly burdensome and rigid, especially in comparison to other energy industries. The big challenge that politics needs to tackle in earnest is finding a regulatory approach that maximizes safety without imposing too many obligations on operators and thereby preventing nuclear projects from taking shape in the first place.

Lots can be done to harmonize and streamline nuclear regulations without impacting the safety of NPPs or reactors, while decreasing construction costs. For example, regulatory changes during NPP construction is one of the main reasons for cost overruns and schedule delays. A practical solution would be to agree on lock-in regulations for a project so that construction doesn’t need to undergo time-consuming and difficult changes in advanced stages. This would constitute a major advancement in improving communication between regulator and operator, because regulatory bodies are not always aware of the costs and technical implications they impose by demanding changes.

Moreover, more flexible regulations can be helpful in reducing the uncertainty caused by new requirements and would prove particularly useful with the advent of new reactor models like SMRs. While polluting coal power plants are often very close to cities, NPPs are surrounded by emergency safety zones spanning kilometres – a requirement that is obviated by the inherent safety design features of SMRs.

All of the aspects detailed above show the important role nuclear can play in mitigating the worst effects of climate change. Many of these challenges can be greatly and directly affected through policy. They are politically-made problems and excuses, and are not at all physical, technical or even public health related. There is nothing fundamental that makes nuclear unviable.

Just imagine what could be done for the climate if there was a similar level of political support for nuclear energy as there is for wind and solar?