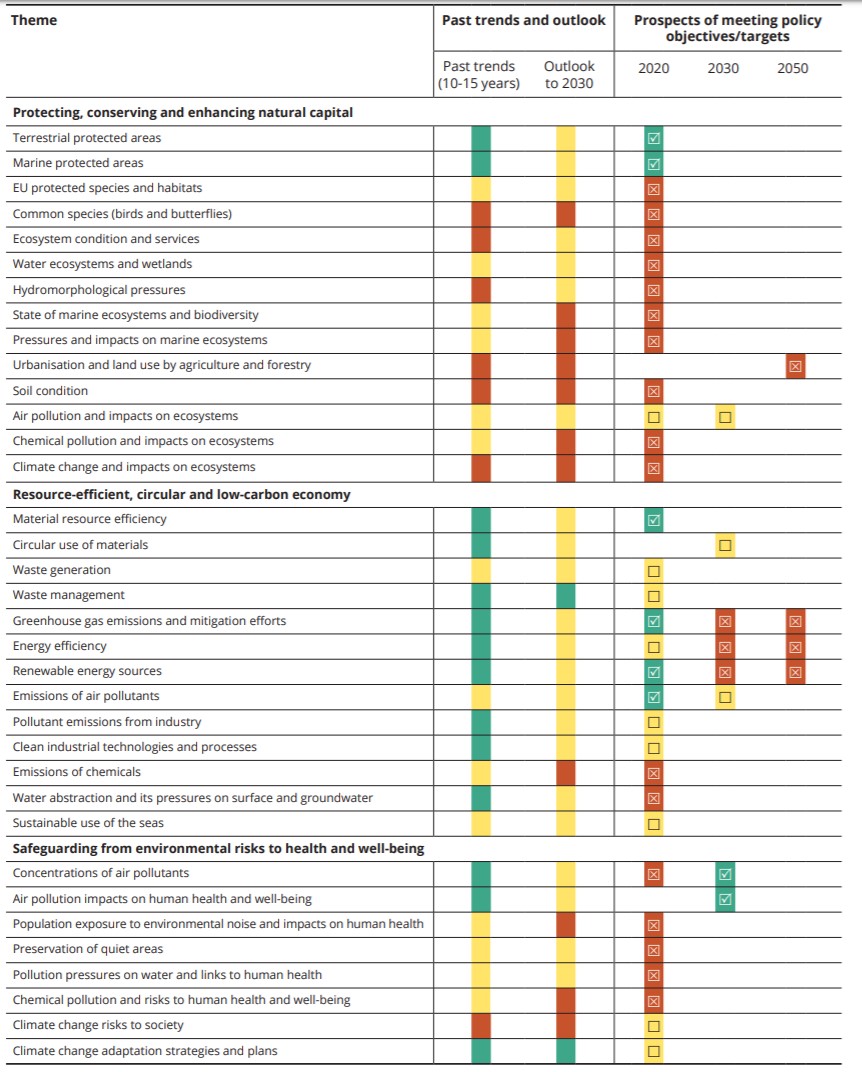 Every five years the European Environmental Agency (EEA) publishes its State of the Environment Report, bringing together the most up-to-date knowledge on the EU’s environmental trends. The recently published 2020 report suggests policymakers and the general population should both do a much better job of caring about nature.

The key conclusion of the new report is that “Europe will not achieve its 2030 goals without urgent action during the next 10 years to address the alarming rate of biodiversity loss, increasing impacts of climate change and the overconsumption of natural resources”.

As of today, the EU has met only six out of the 32 environmental targets for 2020. And based on the projections for 2030, the EU is set to meet only to of its 2030 goals. In short, “Europe risks destroying its natural capital without a full appreciation of what is being lost,” the authors say.

The unfavorable conservation status of 60% of species, the poor monitoring of soil degradation and deteriorating ecosystems are just a few among many challenges piling upon each other across the continent. Among other concerns are sustained ozone and nitrogen pollution, newly emerging chemical pollutants and growing pressures on human health.

All these problems come as a stark warning to policymakers on the need for greater effort to reach the EU’s environmental goals. To address those challenges, the EEA calls for putting sustainability at the center of decision-making, instead of “promoting economic growth and seeking to manage harmful side-effects with environmental and social policy tools”.

Currently, the EU’s ecological footprint is above the global average, while it is also contributing to environmental destruction in other parts of the world through the consumption of imported goods. Under such a path, Europe may do well for a few more decades but at the expense of planetary health and sustainability across the globe.

At the heart of the problems are unsustainable consumption and production patterns that drive an environmentally destructive path. That is why there is an urgent need to rethink lifestyles, food consumption and transport habits. More broadly, beyond more ambitious policies and changes in lifestyles, it is as important to stop subsidizing fossil fuels and other environmentally destructive activities, the authors say.

The rise of public awareness, technological innovation, community initiatives, and the European Green New Deal suggest there is room for hope. The report also acknowledges the evolution of the EU’s environmental legislation from “targeter regulatory interventions” to “macro-integrated policy packages with a broader sustainability perspective”.

Major progress on climate change mitigation and reducing emissions, sustainable finance initiatives as well as action on tackling pollution and waste through a commitment to circular bioeconomy are encouraging signs that a sustainable future is still possible. That is especially so considering that last month the EU dedicated 21% of its 2020 budget to climate matters.

However, much more needs to be done. While there is no question that the EU is taking sustainability seriously, it is time to bring the efforts to a new level so Europe can tackle the challenges it faces.