Global warming will be a boon to mangrove forests 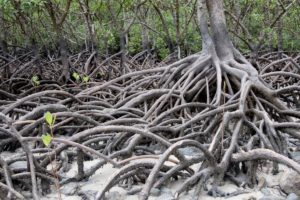 Climate change is set to wreak havoc with natural ecosystems, but not all species of flora and fauna will suffer setbacks. Some species that thrive in warmer temperatures are bound to benefit from a warming climate.

These species include mangroves, which flourish at tropical and subtropical latitudes near the equator. Species of mangrove trees grow in relatively inhospitable areas whose conditions most other trees are ill equipped to tolerate. Mangroves have adapted to waterlogged and anoxic soil, including slow-moving and brackish water.

What many mangrove trees cannot stand, however, is freezing temperatures since they prefer warmth. As a result, global warming will be a boon to mangrove trees and aid their spread. Instead of being limited to their current homes in subtropical and tropical climates, mangroves will take advantage of warming temperatures and expand into temperate climate.

A study published in the journal Global Change Biology reports that mangrove trees are now found at higher latitudes such as the Atlantic coast of the United States. “There is now sufficient evidence that mangrove species have proliferated at or near their poleward limits on at least five continents over the past half century, at the expense of salt marsh,” the study’s authors note.

Many mangrove trees have dense intertwined roots that descend from their trunks and branches that stabilize and support them from battering waves and shifting tides. Those roots enable them to thrive at coastlines and in turn the plants provide a vital ecological service by reducing erosion from waves and tides at these coastlines.

Dense mangrove forests lessen the power of waves before they hit coastal areas. As climate change will causes rises in sea levels and bring about extreme weather events more frequently, mangrove forests can help lessen devastation in coastal areas. “The shift from salt marsh to mangrove dominance on subtropical and temperate shorelines has important implications for ecological structure, function, and global change adaptation,” the researchers note.

In addition, like tropical wetland forests such as peatlands, mangroves are among efficient carbon stores. According to a study published in the journal Nature Geoscience, coastal mangrove forests contain 1,023mg carbon per hectare on average. By protecting existing mangrove forests and allowing them to spread from their original habitats, we can mitigate the effects of climate change by relying on these hardy plants to suck more carbon out of the atmosphere.

The post Global warming will be a boon to mangrove forests appeared first on Sustainability Times.