After millions of years China’s ancient paddlefish is no more 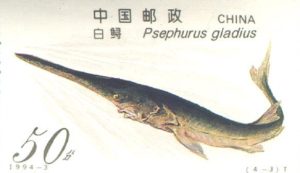 The Chinese paddlefish (Psephurus gladius) is among the world’s largest freshwater fish that makes its home in the Yangtze River. Or rather make that “is” “was.”

A team of Chinese researchers say that the critically endangered fish, which could grow to 7m long and had ancient evolutionary lineage, has gone extinct unnoticed. The archaic fish, which boasted a long protruding snout, was one of only two extant members of a relict lineage that was widespread between 34 million and 75 million years ago.

It has not been spotted in the wild for a decade and a half, which indicates that it has been driven extinct. Recent field research has not turned up any specimens either.

“As no individuals exist in captivity and no living tissues are conserved for potential resurrection, the fish should be considered extinct according to the IUCN Red List criteria,” the researchers write in a new study.

As recently as the 1970s Chinese paddlefish were common enough in the Yangtze River for fishermen to catch them regularly. By the early 1980s, however, the newly constructed Gezhouba Dam had divided the population of the fish into two, severing one group from the other. The dam also stopped fish trapped downstream from swimming upriver to traditional spawning grounds.

“The mega river ecosystem of the Yangtze River was once home to diverse aquatic megafauna but is increasingly affected by various anthropogenic stressors that have resulted in continuous loss of biodiversity, such as the probable extinction of Yangtze River Dolphin,” the scientists write.

The Chinese paddlefish was last sighted in 2003. During field surveys of the Yangtze River as well as its tributaries in 2017 and 2018 the researchers came up empty-handed as they were not able to locate a single paddlefish. “Based on the weight of the evidence, the species can be declared as extinct with high certainty,” the researchers observe.

The demise of the species doesn’t bode well for the prospects of other critically endangered local species such as the Chinese alligator (Alligator sinensis). “The delayed extinction of Chinese paddlefish resulted from multiple threats, suggesting that optimizing conservation efforts on endangered Yangtze fauna is urgently needed,” the Chinese scientists write.

The post After millions of years China’s ancient paddlefish is no more appeared first on Sustainability Times.