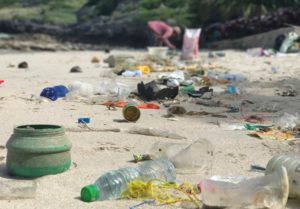 Thailand is one of the world’s worst plastic polluters, but local businesses are taking steps to change that. Numerous retailers, including convenience stores, have stopped giving out single-use plastic bags to customers this year.

This approach might have potential to reduce some of the colossal amounts of plastic waste produced domestically. So far so good. Yet there is a catch: it isn’t just locals who are generating the massive amounts of waste in the country.

Waste management experts have warned that Thailand, a country known for its scenic tropical beaches, is becoming “the garbage bin of the world.” Greenpeace Southeast Asia has reported that Thailand imported more plastic waste in 2018 than in 2017: 329,137 tons, to be precise. The Southeast Asian nation imports most plastic garbage from Japan, Hong Kong and the United States (173,371 tons; 99,932 tons; and 84,462 tons, respectively).

Experts have noted that many local recycling factories prefer plastic garbage from outside the country because domestic plastic waste is potentially contaminated. Plastic waste imported from abroad needs to be in accordance with Thai regulations, which is appealing to recycling facilities that seek to reduce expenses on sorting and cleaning recyclable plastic waste.

Yet waste imports come with their own problems. “[M]uch of it is mislabeled as ‘recyclable’ even though the shipments constitute hundreds of thousands of tonnes of contaminated plastic and other mixed wastes from developed countries that cannot be processed,” Greenpeace reports.

Thailand is already the world’s sixth biggest contributor to ocean waste and a lack of efficient waste segregation and waste management poses further risks to the country’s environment. Some environmentalists blame an upsurge in plastic waste on a new law approved by Thailand’s government.

“Although high-profile one-time spot-checks of industrial sites by Thai authorities, where e-waste and plastics from abroad were being illegally handled for domestic processing, received headline media attention in 2018, no information about follow-up procedures to ensure legal compliance has ever been disclosed,” said Penchom Saetang, director of Ecological Alert and Recovery Thailand.

“Systematic efforts to undertake such investigations of facilities remain to be established,” the expert added. “This lax regulatory environment is now being further exacerbated by recent amendments to the national Factory Act, signed into law in April 2019.”

The revised act enables companies to invest in even more recycling plants, which will likely see plastic and environmental pollution increase further still.

Worse: much of the imported waste ends up at unregulated facilities run by fly-by-night operators who reportedly compel badly paid workers to labor in unsanitary conditions that pose severe health risks. The environmental risks of a largely unregulated recycling industry are also considerable.

Locals in the vicinity of factories that recycle plastic and electronic waste are often exposed to unhealthy doses of pollutants on a daily basis.

“A farmer who lives nearby saw his cattle getting slimmer and slimmer. He thinks it’s because of the factory,” a Buddhist monk in Chachoengsao Province, near Bangkok, told a news agency. “And a woman recently died after being sick,” he added. “Her daughter thinks she became ill because of smoke from the factory. The smoke was inside her house all the time.”