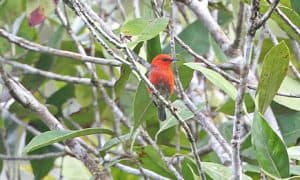 Islands account for nearly a sixth of the planet’s land area and many islands boast unique flora and fauna because plants and animals have evolved on them in isolation. In fact, nearly a third of biodiversity hotspots on the planet are found on islands large and small.

Many islands continue to surprise even seasoned biologists by yielding species new to science. A case in point is Sulawesi, a large equatorial island in Indonesia featuring rugged mountain ranges and pristine coastlines. During a six-week expedition recently, a team of scientists discovered a total of 10 new bird species in the area: five new songbird species and as many new avian subspecies.

And they did so just on three small remote islands near Sulawesi. The biologists decided to investigate the small islands east of Sulawesi because of the area’s relative isolation and its geological history, following in the footsteps of earlier researchers and explorers. Sulawesi is where the British naturalist Alfred Russel Wallace embarked on a famed field trip in the 19th century, which led him to devise the theory of evolution through natural selection independently of Charles Darwin.

It is highly likely that several other species of birds and other animals are waiting to be discovered in the area. “Our findings suggest that humans’ understanding of biogeographically complex regions such as Wallacea remains incomplete,” the researchers write in a study published in the journal Science, referring to an area comprising a group of islands around Sulawesi by its scientific name.

Traversing remote forests and mountainous areas on three small groups islands, near Sulawesi, Frank Rheindt, an ornithologist at the National University of Singapore, and his team ventured into little-explored terrain. Their finds went beyond their wildest expectations.

Nearby, on the island of Peleng, they came across the Peleng fantail and the Peleng leaf-warbler, as well as a new subspecies, the Banggai mountain leaftoiler.

Then on the island of Togian, they discovered the eponymous Togian jungle-flycatcher, a newly described subspecies.

“It’s a real surprise to see that in the 21st century there’s still a place on Earth, a relatively limited area, where there are five new subspecies and five news species of birds to be found,” Rheindt says. “It goes to show that there are still many areas on Earth that are underexplored.”

Now that these new birds have been discovered for science, the task is to preserve them for posterity in their natural habitat. “Urgent, long-lasting conservation action is needed for some of the new forms to survive longer than a couple of decades beyond their date of description,” Rheindt stresses.

“It’s almost a shameful blight on humanity that we have charted the moon and gone to the depths of the ocean, but only know about 6 to 7 per cent of the species on the planet,” the ornithologist adds. “The remainder are undescribed, perhaps soon to go extinct without ever being known by us.”