Keeping wild elephants away from crops … with buzzing bees 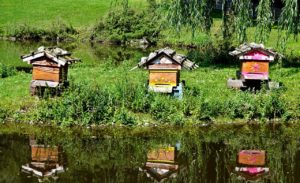 Elephants are the largest land mammals on Earth and they are voracious eaters. And that can be a problem to farmers in Africa and Asia whose crops these jumbos love raiding for food.

To protect their crops, farmers often shoot or poison elephants, which can take a toll on the wild populations of these critically endangered animals. Yet there is another way: employing the help of small flying insects.

Elephants do not fancy belligerent bees and this can be useful for local farmers whose plantations are often raided by wild elephants.

By placing beehives around their plots, however, farmers can protect their crops from elephants. Unlike human skin, elephant skin is too thick for bees to penetrate with their strings. The pachyderms, however, have sensitive areas such as the tip of their trunk, mouth and eyes. A swarm of bees can cause the jumbos real pain and the elephants know this.

Conflicts between wildlife and communities surrounding protected areas are unavoidable. Often wild elephants wander beyond the boundaries of their natural habitats to look for food in farmers’ plantations, causing damage to crops. The conflicts sometimes end up with tragic outcomes to elephants or people, or both.

Africa is home to especially aggressive bees that have a tendency to pursue and harass people and animals that they consider to be a threat. Researchers from the University of Oxford have conducted experiments by utilizing African bees as a non-violent means to scare foraging elephants from village farms.

Using beehives strung on wires around a cultivated plot can keep the pachyderms away, they have found. If a jumbo brushes up against any of the beehives, the disturbed honeybees will swarm out and launch an attack. This simple trick can keep away 80% of elephants, according to the researchers.

“If we could use bees to reduce elephant crop-raiding and tree destruction and enhance local income through the sale of honey, this could be a significant step forward towards sustainable human-elephant coexistence,” said Lucy King, a zoologist at the University of Oxford in the United Kingdom.

The method is not only used by more and more farmers in Africa but has also been put to good use by some communities around protected areas in Thailand. Even though bees in Asia are less aggressive than their cousins in Africa, the measure in Thailand still has a reported success rate of 74%. In fact, it works better than other common methods such as electric fences, which can kill elephants.

Once elephants are attacked by bees, they retain a painful memory of the place where the attack took place and avoid it in future, noted a Thai researcher from the Phuluang Wildlife Research Station in northern Thailand where wild elephants still roam in some local forests.

“The key message of the beehive fence project is it can prevent crop losses and help farmers save money,” said Jirachai Arkajag, chief of the Phu Luang Wildlife Research Station. “We can’t ask them to help protect the elephants if their stomachs are empty.”

One elderly Thai farmer struggled in vain for years to keep elephants away from his rice paddies where they ate most of his crops. Measures like setting off firecrackers when the elephants showed up failed. So he decided to give beehives a try. This simple technique, he told a Thai newspaper, worked like a charm.

The post Keeping wild elephants away from crops … with buzzing bees appeared first on Sustainability Times.