Mass tourism is a curse on the planet. It doesn’t have to be 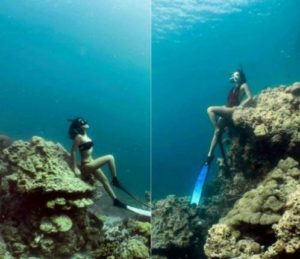 Mass tourism has been a blessing for billions of people worldwide. We can now travel to exotic destinations with greater ease than ever before, there to kick back, sightsee and live it up.

Yet mass tourism has hardly been a blessing for the environment. Global tourism leaves a giant carbon footprint and it also contributes to large-scale environmental degradation worldwide through the conversion of relatively isolated and previously pristine natural areas into busy travel destinations.

Then there are the growing rates of pollution generated by mass tourism. Eight out of 10 tourists travel to coastal areas with beaches being the most popular destinations. That hardly benefits marine ecosystems. Beaches get covered in trash, fragile marine areas get deluged by rampaging holidaymakers, coastal waters become heavily polluted with effluents and untreated sewage.

“[D]uring peak tourist season, marine litter in the Mediterranean region has been found to increase by up to 40 per cent,” UN Environment observes. “With great irony, tourism, which often depends upon the Earth’s natural beauty, is making enormous contributions to its decay in a very visible way.”

The Mediterranean, one of the world’s most popular tourism destinations, alone draws some 220 million tourists who  flock to the region each year. Their number is expected to balloon to 350 million within two decades. Around half of the visitors head to the beaches where often they unwittingly wreak havoc on the environment through their sheer numbers.

“The huge tourism infrastructure developments have dramatically altered the natural dynamics of Mediterranean coastal ecosystems,” the World Wide Fund for Nature explains. “For example, more than half of the 46,000km coastline is now urbanized, mainly along the European shores. This infrastructure is a major cause of habitat loss in the region, and some locations are now beyond repair.”

Not even previously remote locations are being spared the ravages of tourism. In the Galapagos Islands, for instance, tourist numbers nearly doubled, to 275,000 in 2018, within just a decade. Over the past three decades local tourism has grown at a rate of nearly 7% each year. Now these unique and biodiverse islands, which served a formative influence on Charles Darwin in formulating his theory of evolution through natural selection, are on the verge of being transformed irrevocably.

Not all is doom and gloom, however. More and more tour operators and governments are recognizing the importance of responsible tourism in order to protect unique biodiversity hotspots from further harm. In an effort to save local marine life, Thailand has closed down a scenic and popular beach, which came to fame as the setting for the Hollywood movie The Beach, in the Andaman Sea. Before the closure as many 5,000 tourists arrived at the small beach daily, ferried by some 200 motorboats. Since the beach was closed, marine life has been slowly recovering in the area.

Similar steps are being undertaken on a large scale to address some of the worst effects of global mass tourism. One such effort, the Global Plastics Tourism Initiative, aims to reduce the impacts of plastic waste generated by tourism. The colossal amounts of plastic waste that wind up in the oceans are posing an existential threat to numerous species and entire marine ecosystems.

Unless drastic measures are taken, the situation, bad enough as it is, is bound to get worse still. A much-cited statistic has it that by 2050 there could well be more plastic than fish in the oceans. “Plastic pollution is one of the major environmental challenges of our time, and tourism has an important role to play in contributing to the solution,” UN Environment says. “Much of the plastic used in tourism is made to be thrown away and often can’t be recycled, leading to large amounts of pollution.”

The solutions to the vast amounts of plastic generated by mass tourism include phasing out all problematic plastic packaging and items, moving from single-use to reusable plastic items, and embracing effective recycling. “The problem of plastic pollution in tourism is too big for any single organisation to fix on its own,” the Global Tourism Plastics Initiative notes. “To match the scale of the problem, changes need to take place across the whole tourism value chain.”

Once plastic waste enters seas and oceans, it can spread far and wide across the planet. Even beaches on remote uninhabited islands have come to be covered in plastic debris brought by the currents and the tides. That is why reducing plastic waste must be a top priority worldwide.

Minimizing other harmful impacts of mass tourism will be just as important if we are to save beleaguered ecosystems from further depredations inflicted on them by humans. Each of us can do our share. We can stop littering. We can stop trampling on corals. We can stop removing creatures from the sea as keepsakes.

And we can avoid destinations altogether if they are already plagued by masses of other people.

The post Mass tourism is a curse on the planet. It doesn’t have to be appeared first on Sustainability Times.