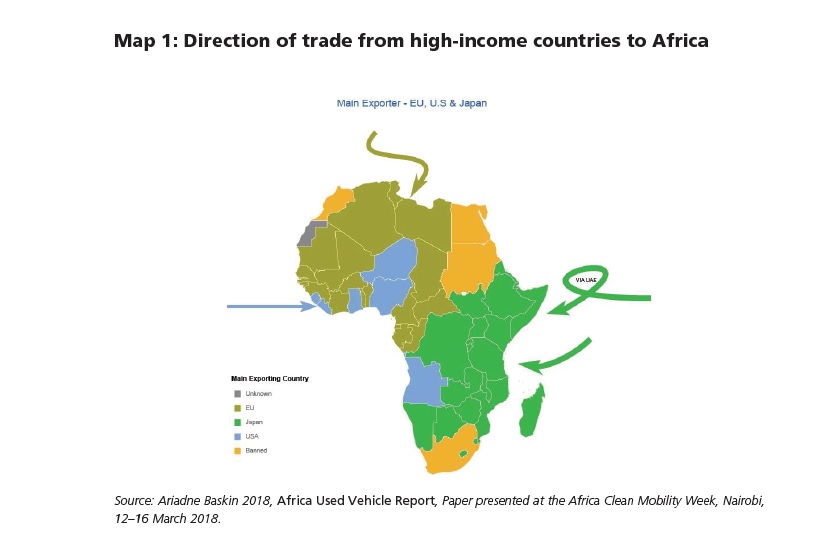 African leaders are taking another big step forward on vehicle emissions, which contribute to chronically poor air quality and carbon emissions in some of the world’s fastest-growing cities – and they’re taking a two-pronged approach to achieving their goals.

The Economic Community of West African States (ECOWAS) is a regional governing body that represents 15 nations, including coastal Nigeria and Ghana as well as Sahel countries like Mali and Niger. ECOWAS just passed new fuel standards to bring them in line with Europe, while simultaneously limiting the age of used vehicles that the developed world has dumped on the African continent for far too long.

First the vehicles: The Centre for Science and Environment in India warned two years ago that 80 to 90 percent of vehicles on African roads were old imports with out-of-date fuel efficiency and emissions standards. The cars come from Europe, the United States and Japan, while commercial vehicles primarily come from China, Japan and now India.

The dated vehicles present public health risks but also threaten the ability of individual nations, and the global community, to meet carbon emissions reductions in the fight against climate change. Transport accounts for 24 percent of all CO2 emissions from fuel combustion, according to the International Energy Agency, and three-fourths of that comes from road vehicles.

The efforts to make new vehicles in African nations, such as Volkswagen’s EV programs, are still relatively new; meanwhile, the number of cheap used vehicles continues to grow, and on the African continent where car loans are more difficult to access, they’re still proliferating and polluting.

From now on, ECOWAS will limit the age of imports to 5 years for light vehicles and 10 for heavy vehicles, with a decade-long window for member countries to meet the regional standard.

While countries including Egypt, Uganda and South Africa have age-related or full bans on used-vehicle imports in place, about half of the continent’s nations either had no ban or still permitted vehicles older than eight years, so this decision for 15 West African nations is likely to have real impact.

With the vehicles, though, come the fuels, and West Africa has been the target of lower quality fuels shipped from Europe that fail to meet the EU’s own standards. A 2018 report from the ILT in the Netherlands – the country’s environment and transport agency – looked at tankers that delivered road fuels to West Africa, and in some samples found 300 times more sulfur and twice as many cancer-causing hydrocarbons as the EU allows. A similar report from Swiss NGO Public Eye alleged that European firms intentionally sold “African Quality” fuels to maximize profits and take advantage of the continent’s weaker regulatory environment.

The United Nations Environment Program has been working with African regional bodies to set stronger standards (as recently as 2017, only two countries were known to meet or exceed the Euro III standard) and now ECOWAS has adopted the Euro IV standard for vehicle emissions.

The ECOWAS decision is a big step forward for nations striving to meet their climate and air quality goals, and yet another reminder that Africans no longer want the West to dump their low-quality fuels and “clunker” vehicles in their backyards.