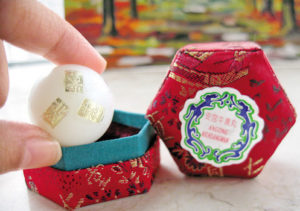 A deadly new coronavirus, which has been linked to China’s wildlife market, continues to take lives and infect yet more people. So one would assume that wildlife traffickers have learned their lesson and stopped peddling their ill-gotten fare, at least for the time being.

Illegal wildlife traders in Laos and China are now trying to cash in on widespread fears over the viral outbreak by peddling quack remedies made from rhino horn and other endangered animal parts, according to the Environmental Investigation Agency, which specializes in environmental crimes.

“The irony of traders marketing an illegal wildlife product to treat a virus believed to have originated in the wildlife meat trade again highlights the need for governments, particularly China, to tackle demand for threatened wildlife used in traditional medicine,” the EIA stresses.

Wildlife traffickers and merchants in Laos and China have been using social media platforms to hawk products like Angong Niuhuang Wan, a classic prescription believed to treat the effects of stokes and reduce fever. It is sold on social media in the form of pellets and balls made up of minerals, herbs and animal parts. Now this ancient medicine is now being touted by several sellers as an effective cure for the new coronavirus.

“One of the sellers is based in China and has a long history of offering tiger, elephant, helmeted hornbill, rhino and other illegal wildlife for sale via WeChat,” the EIA notes.

“Another is a Chinese-owned company with multiple retail outlets in the Laotian capital Vientiane selling tiger, elephant, bear, rhino and other wildlife parts and derivatives. Some items are sold openly and others under-the-counter, while the company WeChat account is full of illegal wildlife for sale.”

Therein lies a problem. Policing social media is a Herculean undertaking, not least because sellers often use code words for their illicit merchandise. Another problem is that many of these quack remedies originate in countries like Laos and North Korea where law enforcement against the illegal wildlife trade is weak or nonexistent.

Millions of people in China, Vietnam and elsewhere continue to believe in the curative power of quack remedies that have no actual medicinal properties or may even have harmful side-effects. Belief in pseudoscientific cures isn’t confined to traditional Chinese medicine, of course. In India, a prominent Hindu spiritual leader has declared that “consuming cow urine and cow dung will stop the effect of [the] infectious coronavirus.”

Such beliefs are held on account that cows are revered by Hindus as sacred animals with allegedly magical properties. Yet the practice of consuming cow dung and urine, however ill-considered that is, does not harm live cattle. The same cannot be said of traditional Chinese medicine, which requires the body parts of dead animals in several popular prescriptions.