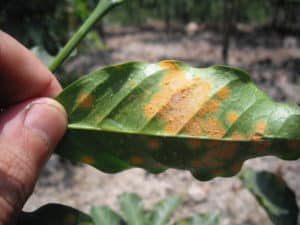 Asian tramp snails, as their name suggests, are originally from Asia. Yet they are now widespread throughout tropical and subtropical regions from Puerto Rico to Australia.

They are an invasive species that has caused plenty of problems to many farmers. Not all is doom and gloom with the snails, however, according to scientists who have found that the invasive gastropods could do a favor to coffee farmers. The snails can do this by devouring a fungus that has been causing an epidemic of disease in coffee plants.

The leaves of coffee plants that are infected by the Hemileia vastatrix fungus come to have yellowish blotches on them. Each one contains a number of spores ready to disperse and infect other plants. The pathogens discolor foliage and eventually cause plants to lose their leaves, which inhibits their ability to produce coffee cherries and the beans within them.

The Robusta species of coffee is more resistant to the fungus, yet Arabica coffee, which is widely preferred by coffee drinkers worldwide, is highly susceptible to coffee rust disease that can devastate entire coffee plantations, wiping out the hard-earned incomes of farmers. Around 70% of Arabica coffee farms have been impacted by the disease across Central America. Coffee producers have been facing the problem for more than a century, yet the pathogen is still not fully understood yet.

“This is one of those rusts that even though it’s been with us for over 100 years, we don’t even understand its entire life cycle,” explains Cathie Aime, a mycologist at Purdue University in the United States. “This is much more difficult than it sounds,” she says.

“For rust fungi, they’re obligate pathogens, so you can’t get pure DNA in meaningful quantities. You can’t grow it in culture or manipulate it in the lab. And they’re microfungi, so you are dealing with extremely small organisms embedded in their host.”

There is no known cure for coffee rust, but farmers apply anti-fungal sprays to prevent their plants from contracting the disease. Yet scientists say that the fungus has the ability to evolve and will likely become more resistant to such preventive measures.

Enter Asian tramp snails. Scientists from the University of Michigan have found that the snails feed on the fungus that causes the coffee rust plaque. The researchers set up an experiment by feeding Asian tramp snails with infected leaves. The results showed that about 30% of the rust was reduced by the snails after just 24 hours.

Although the snails have the potential to be of help by feasting on the dangerous fungus, they themselves are an agricultural pest. In many countries Asian tramp snails cause havoc to crops such as citruses, mangoes, grapes and ornamental plants. That is why using one pest to control another is a case of tradeoffs.

“With the data we are collecting now, we seek to find out if there are any apparent tradeoffs between these two consumers of the coffee leaf rust,” says Zachary Hajian-Forooshani, one of the researchers who conducted the study. “For example, if the fungal parasite is especially efficient at reducing the rust, and the snail eats it along with the rust itself, that could be a tradeoff: promote the snail to control the rust and face the possibility that the snail eats too much of the other controlling factor,” he adds.

Yet further study is needed before the snails can be deployed to battle the fungus so farmers can save their coffee plants. Hajian-Forooshani explains that “the gastropods seem to reduce the number of spores on the leaf, but it’s not clear if the spores can still germinate in the excrement. Also, we don’t know how the effect of the gastropods on coffee leaf rust scales up to impact the pathogen dynamics at the farm or regional scale.”