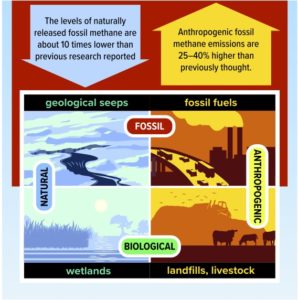 When it comes to atmospheric heat-trapping greenhouse gases, excess carbon dioxide is widely regarded as our greatest foe. Yet methane, too, is a powerful greenhouse gas that is driving climate change. And we have been emitting far more of it than we’ve thought.

A team of scientists says that we have been greatly underestimating the amount of methane we have released into the atmosphere through the burning of fossil fuels. Over the past three centuries, they note in a study published in the journal Nature, atmospheric levels of the greenhouse gas has increased by some 150%. Methane can enter the atmosphere through natural causes, yet the spike has been down to human activities, they say.

Methane is present in the atmosphere in two forms: biological methane and fossil methane. Biological methane is released naturally by wetlands as well as through manmade rice fields, landfills and flatulence from livestock like cattle. Fossil methane, on the other hand, is largely emitted by people through the extraction and use of fossil fuels like oil, gas, and coal.

The researchers measured the composition of air from the early 18th century before the Industrial Revolution and compared it with present-day samples. They found that until around 1870 almost all the methane emitted to the atmosphere was biological in nature. Then the fossil component of the heat-trapping gas began to rise rapidly just when we started using fossil fuels on a large scale after the mid-19th century.

“We know that the fossil fuel component is one of our biggest component emissions, but it has been challenging to pin that down because in today’s atmosphere, the natural and anthropogenic components of the fossil emissions look the same, isotopically,” explains Vasilii Petrenko, a professor of earth and environmental sciences at the University of Rochester in the US who was a coauthor of the study.

Unlike carbon dioxide, which can stay in the atmosphere for a century, methane stays only for a relatively short time, or nine years on average. That is why we could reduce atmospheric methane levels significantly by reining in our burning of fossil fuels, the experts point out.

“[M]ost of the methane emissions are anthropogenic, so we have more control. If we can reduce our emissions, it’s going to have more of an impact,” stresses Benjamin Hmiel, a postdoctoral associate who is the lead author. “If we stopped emitting all carbon dioxide today, high carbon dioxide levels in the atmosphere would still persist for a long time,”

In other words, reducing atmospheric levels of methane can be done more easily than tackling the buildup of CO2. “Placing stricter methane emission regulations on the fossil fuel industry will have the potential to reduce future global warming to a larger extent than previously thought,” Hmiel says.