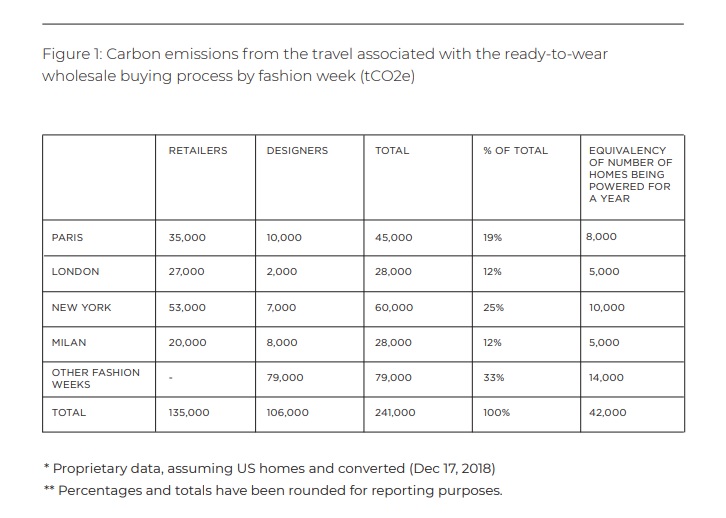 The spread of coronavirus has entered a new phase with outbreaks outside of China, and Italy’s count had reached 200 by Monday. What that meant for Milan Fashion Week, which was just wrapping up in the neighborhood of many of northern Italy’s confirmed cases, is that Sunday’s show from designer Giorgio Armani was presented via livestream on the company’s website from an otherwise empty theater.

“This is a preventative measure decided by Mr. Armani to support national efforts in safeguarding public health,” the fashion house said in a last-minute statement.

The COVID-19 virus crisis left the man himself wearing a decidedly unfashionable face mask, but the solution to present the Armani collection online is one that some campaigners say should be employed all the time. That’s according to a new study released by Carbon Trust and ORDRE.com, a fashion industry player that advocates for tech alternatives to fashion-week travel.

While the sustainability of fashion is getting as much attention as the models these days, most of that is directed toward materials, manufacturing and the throwaway consumer culture.

“One aspect of the industry’s impact that is frequently overlooked is the surprisingly high amount of business travel associated with designers and buyers attending international fashion weeks as part of the industry’s core buying process,” the researchers explained. “Every year, the big hitters of the international fashion world gather together at each of the ’big four‘ fashion weeks: New York, London, Milan and Paris.”

Yet there’s also Barcelona and Brussels, Seoul and Shanghai. All told, the total travel-related carbon emissions calculated by the research team amounted to 241,000 tons of carbon dioxide equivalent emissions (CO2e), and they caution that it’s likely a conservative estimate.

About 60 percent of that was associated with air travel for buyers and design employees, but it doesn’t include the additional travel from journalists or influencers who also attend the global fashion shows. At 37 percent, more than a third of the emissions total was for hotels, meals, local travel and related accommodations, while the remaining fraction was attributed to the cost of moving the clothing collections themselves.

“It is more than the 2017 greenhouse gas emissions of Saint Kitts and Nevis (238,000 tCO2e) which highlights the daunting scale of the challenge posed by climate change,” the report said, citing 2018 Emissions Database for Global Atmospheric Research (EDGAR) data for the Caribbean islands.

The carbon emissions attached to Milan alone would power 5,000 homes in the United States for a year, the “Zero to Market” report added. It’s about the same as London, but less than either Paris or New York. The show-related travel costs money too, and it’s an impressive US$1.4 billion.

The report recommendations include some familiar ones, like opting for train travel when possible or grouping destinations in an itinerary that lowers the travel impacts. That will require change in the industry itself, as does the suggestion to hold all the seasonal-market shows at the same time.

Italy’s COVID-19 crisis may be why Armani chose to stream his show, but there shouldn’t be a global pandemic to prove it can be done. The fashion world needs to change, the researchers said.

“My hope is that Zero To Market can act as a catalyst within the industry, driving it to take a deeper look at current business practices,” says Simon Lock, the founder of ORDRE. “Is there a better way for retailers to place orders and should fashion weeks as we know them be dismantled and rebuilt?”